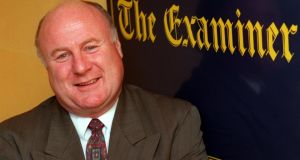 A printing company which claims it lost a valuable contract to publish newspapers in the former Thomas Crosbie Holdings media group following a “pre-packaged” restructuring, must provide security for some €3 million legal costs of most of the defendants before proceeding with its action, a judge has ruled.

Ms Justice Mary Finlay Geoghegan yesterday ruled that one of the defendants, Thomas Crosbie Printers, which is insolvent, was not entitled to a security for costs order after finding it had made out no prima facie defence to the substantial claims made against it by Webprint Concepts Ltd, including claims of breach of contract.

Webprint had entered into a 15- year printing agreement with TCP in 2005 under which TCP appointed Webprint as its “sole and exclusive printer” to print the relevant newspapers.

In 2012, the income earned by Webprint from the TCH Group accounted for some 70 per cent of its income. Last March Webprint claimed TCP owed it €2.38 million under the printing agreement.

The judge ruled that the other defendants, including TCH, Landmark Media, Thomas Crosbie and Alan Crosbie and Irish Times Ltd, were entitled to orders for security for costs of the case, to be heard in October.

Webprint alleges it lost the contract as a result of a “wilful” and “pre-packaged” restructuring of the TCH group earlier this year.

All the defendants sought preliminary orders requiring Webprint to provide security for costs. Webprint opposed on grounds including that its financial difficulties arose from the alleged contrived restructuring.

The financial loss suffered by it exceeded alleged legal costs of €3.1 million, it claimed.

Ms Justice Finlay Geoghegan ruled that all the defendants except TCP were entitled to security for costs orders on grounds including they had prima facie defences to the claims and Webprint had not discharged the onus of establishing special circumstances preventing orders for security.

1 Retailers accused of ‘stealing business’ from rivals by flouting restrictions
2 How long can Government afford to keep State pension age at 66?
3 Nama grants Ronan four-month extension on €160m glass bottle site deal
4 In praise of Gogglebox Ireland, an essential service in all but name
5 Irish whiskey sales near milestone of 12m cases a year
6 Goldman Sachs in talks to take over Blanchardstown shopping centre
7 Outgoing Irish a sitting duck for Covid
8 How to improve ethics at your company
9 Wake-up Call: Why unethical high performers are not shunned by peers
10 Dealing with the financial fall-out of divorce among over-60s
Real news has value SUBSCRIBE