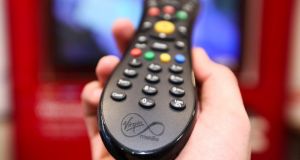 UPC Ireland, the cable company with more than 500,000 customers, is to “join forces” with the British company Virgin Media, according to both companies’ parent, Liberty Global. ( Photograph: Chris Ratcliffe/Bloomberg)

UPC Ireland, the cable company with more than 500,000 customers, is to “join forces” with the British company Virgin Media, according to both companies’ parent, Liberty Global.

An internal email sent to all staff this morning says Magnus Ternsjö, the managing director UPC Ireland, is to join the executive committee of Vigin and will now report directly to Tom Mockridge, the former News International executive who runs Virgin Media.

The email states that both companies will seek “economies of scale” and are exploring “further regional co-operation”, raising the possibility that UPC may eventually be folded into the operation of Virgin, which was bought in February by Liberty for £15 billion (€18.8 bn).

When asked what are the long-term implications for jobs, control and operation of the Irish arm as a result of “joining forces” with Virgin, UPC Ireland would only say that it is “business as usual”.

Dana Strong, the former chief executive of UPC Ireland who still chairs the company, is the chief operating officer of Virgin Media. Robert Dunn, another former boss of UPC Ireland, is its chief financial officer.