Time for INM to bite the bullet 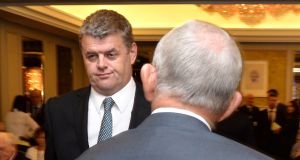 On Saturday, the directors of Independent News & Media (INM) held an unplanned board meeting via teleconference to consider the latest twist in the Office of the Director of Corporate Enforcement’s investigation into the company’s affairs.

It’s a sorry saga stretching back over about 18 months, hitting INM shareholders in the pocket.

The ODCE became involved following a dispute in late 2016 between INM’s then chief executive Robert Pitt and its former chairman, Leslie Buckley, over a possible acquisition of Newstalk, the national radio station owned by Denis O’Brien’s Communicorp. O’Brien owns just under 30 per cent of INM.

Pitt made a protected disclosure to the ODCE on foot of that row. He later abstained in a vote to re-elect Buckley as chairman at the company’s annual general meeting before leaving the business last October to move on with his life.

In November 2017, the ODCE widened its investigation into INM to include its handling of a potential data breach.

That same month, Ian Drennan, director of corporate enforcement, made an application to the High Court in relation to documents held by Buckley, who claimed privilege over them. Buckley prevailed on the point of privilege but the court hearings revealed how the former chairman had facilitated outside corporate security and IT experts in gaining access to the newspaper group’s sensitive internal systems.

The ODCE wanted to know who paid for it and why. All we know for sure is that INM did not.

At the World Economic Forum in Davos in January, The Irish Times asked Denis O’Brien, INM’s largest shareholder who was represented on the INM board by Buckley, if he had paid the bill. O’Brien declined to comment, as did Buckley when the same question was put to him at a later date.

What we do know is that the cyber security and IT experts who received the information, Derek Mizak and John Henry, are associated with companies that work closely with O’Brien’s Caribbean telco, Digicel. Buckley is vice-chairman of Digicel and a long-time business associate of O’Brien.

Last week, the ODCE notified the company that it would seek the appointment of an inspector at a High Court sitting on April 16th. This is a power rarely sought by the corporate watchdog, the last time being in May 2008 in relation to DCC.

This must have come as a shock to the four non-executive directors (John Bateson, Fionnuala Duggan, Murdoch MacLennan and Seamus Taaffe), who joined the board of the company only on March 1st following a shareholder meeting.

Their appointments were supposed to mark a new start for INM, bringing the board composition back into compliance with corporate governance rules.

Given the extraordinary events at INM over the previous 18 months, we can only assume that they had done extensive due diligence on the company before agreeing to join the board. They might now feel like chumps.

Lawyers at McCann Fitzgerald are currently assessing INM’s options, and they have just under three weeks to make a decision.

The ODCE has yet to publicly state its reasons for its dramatic move. Appointing an inspector is an alternative to a criminal investigation, and arguably a quicker route to discovering what was going on at the company.

The inspector will have the far-reaching powers to access documents and quiz executives and directors.

The inspector’s report would essentially provide a roadmap to any further actions by the ODCE, although its findings aren’t admissible in a criminal case. Based on past experience, this might be a precursor to the State’s corporate watchdog seeking the disqualification of someone as a director.

This whole process will unquestionably be uncomfortable for INM. It would take at least a year to complete, and cost the company a chunk of change.

But if INM truly wants to draw a line under this sorry saga, and restore its battered reputation with the markets, chairman Murdoch MacLennan, a media veteran, should bite the bullet and accede to the ODCE’s request.

In the interests of shareholders who have a right to know who paid the bill and why.

Three quarters of home-buyers now opting for fixed-rate mortgages 12:57
Change of plan: How businesses are learning to reassess and reinvent 12:20
EU urges states to lift drug export bans to prevent shortages 12:19
Inflation ticks up 0.7% in year to March - CSO 12:03
Unemployment rate jumps to 16.5% in Republic 11:11
Search executive
jobs on irishtimes.com