Businesses with outdated online strategies are being left behind, Wolfgang Digital says 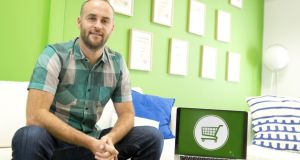 Consumer spending online surged 51 per cent in the second quarter compared with the same period in 2013, according to a new e-commerce study by marketing company Wolfgang Digital. Traffic to the websites included in the study rose 30 per cent over the year.

The faster growth rate for revenue suggests the amount consumers are spending per visit is also increasing, with the Wolfgang study pointing to a 17 per cent increase in average revenue per visit.

The Wolfgang Digital study is based on an analysis of e-commerce websites with a combined revenue of more than €80 million in 2013, a sample that represents 2 per cent of the €4 billion e-commerce market in Ireland.

Contributing companies include Mothercare, Lifestyle Sports, the Kilkenny Shop, Littlewoods Ireland and McElhinneys, as well as a number of travel and charity sites.

When just the retailers in the study were considered, revenues grew by 57 per cent year on year, a rate that is as much as 20-27 times faster than the modest climbs recorded for general retail revenues by the Central Statistics Office and Retail Excellence Ireland.

The study reveals “a tale of two extremes”, with a high deviation between the performance of the companies, according to Wolfgang Digital founder and chief executive Alan Coleman.

“Some people are getting smarter, others are being left behind,” he says.

Few companies were at the “average”. Four out of five participants saw their revenue grow year on year; and, of those, 30 per cent more than doubled their revenue.

But for the one in five companies that saw their revenue go south, the average rate of decline was a damaging 25 per cent.

“It’s either disrupt and win big, or fail and lose,” says Coleman. “Online sales are cannibalising offline sales, so if companies aren’t getting the online right, just by standing still they are going backwards.”

The digital landscape is complex and fast moving, he adds, giving businesses the opportunity to enjoy substantial revenue growth but also putting them at risk of enduring sharp losses.

“Google releases new advertising features and algorithm updates weekly, and those who stay on the right side of the fast-paced rate of innovation are rewarded with extraordinary returns.”