New owners have cut operating costs and invested a further €300,000 in title 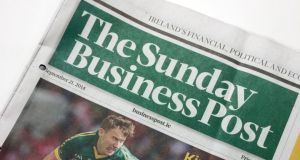 The directors of Post Publications said they were on track to make a profit during the first six months of 2015. Photograph: Bryan O’Brien/The Irish Times

Post Publications Limited, the company behind the Sunday Business Post, sharply reduced its operating losses in the year to the end of June 2014, accounts filed at the Companies Registration Office show.

The newspaper made a pretax loss of more than €628,000 in the period, having incurred exceptional costs of €409,374 following a redundancy programme and move to a new premises.

The title was rescued at that time by investment firm Key Capital and newspaper industry executive Paul Cooke, who acquired it after former owner Thomas Crosbie Holdings put the company into examinership, seeking court protection from its creditors.

The directors of Post Publications said it was on track to make a profit during the first six months of 2015.

A new digital offering will be launched shortly. “Premium content on the site will remain behind a paywall in line with existing strategy,” the directors said. “The board believes that the decision by other outlets to charge for content is further proof that readers will pay for quality journalism and premium content,” they write, in reference to the Irish Times launch of digital subscriptions.

Post Publications employed an average of 61 people in the year to the end of June 2014, down from 74. Some 38 are involved in the production of the newspaper, while there are 15 sales and distribution staff and eight employed in management and administration.

As with all newspaper titles, print sales have been on a declining trend in recent years, and at the last count, during the second half of 2014, the Sunday Business Post had a circulation of 33,233. This was down 3.2 per cent year on year.

Both circulation and advertising revenue remain “under pressure”, the directors noted.

Mr Cooke has been the company’s chief executive of the company since he invested in it alongside Key Capital.

1 In six months we will be in the grip of a 1980s-style recession
2 Aer Lingus wants quarantine period axed to resume flights in July
3 Apple tax case: Four individual lawyers paid over €500,000 each
4 Should my mam wait for house prices to drop before buying?
5 Stocktake: Has Warren Buffett lost the magic touch?
6 Primary care centre network will require €2.55bn investment
7 Call to ease quarantine rules, dismal data on sales and the cost of primary healthcare
8 Brother is dragging his heels as executor of uncle’s will - is there anything I can do?
9 Parts of Brown Thomas and Arnotts to reopen next week
10 Thailand attempts to lure travellers with luxurious lockdown options
Real news has value SUBSCRIBE

Germany’s Lufthansa records net loss of €2.1bn in first quarter 06:40
In six months we will be in the grip of a 1980s-style recession 06:30
Call to ease quarantine rules, dismal data on sales and the cost of primary healthcare 06:30
Primary care centre network will require €2.55bn investment 06:00
Aer Lingus wants quarantine period axed to resume flights in July 05:15
Search executive
jobs on irishtimes.com