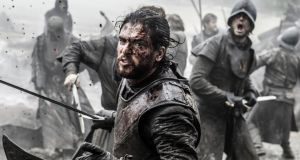 Game of Thrones: each episode shown on Sky reached more than six million viewers across Europe. Photograph: HBO via AP

European pay-TV group Sky has reported a 12 per cent rise in operating profit to £1.56 billion (€1.85 billion) for the year to the end of June.

The company, which is 39 per cent owned by Rupert Murdoch’s 21st Century Fox, said product innovation and a focus on acquiring premium content would help it deliver a 5-7 per cent rise in revenue in the year ahead – a better rate than previously expected.

Sky said it had a “sustained strong performance” in Ireland and the UK , where it collected revenue of about £8.4 billion in the year to the end of June, climbing 7 per cent and passing the £8 billion mark for the first time.

It does not break out separate figures for the Irish market, where it employs about 900 people in Dublin.

Sky chief executive Jeremy Darroch said the broadcaster added 808,000 customers across its European operations over the year, taking its total to 21.8 million. In the UK and Ireland it added 445,000 customers to a total of almost 12.5 million.

However, price rises and a “limit” on discounts for loyalty contributed to 11.2 per cent of its customers ending their subscriptions. This was up from a churn rate of 9.8 per cent in 2015.

Sky, which launched broadband services here in 2013, does not say how many customers it has in Ireland, but it is understood to be the largest pay-TV provider here, although the free-to-air platform Saorview has a presence in more homes.

The company said each episode of Game of Thrones, which it airs across its European markets as a result of a deal with US network HBO, had reached more than six million viewers.

It also benefited from good audiences for its sports content. A “thrilling” end to the English Premier League title race drove quarterly audiences up 7 per cent year on year in the UK and Ireland, while Bundesliga viewing on Sky Deutschland grew 9 per cent.

Sky also ramped up its increased cost savings from the integration of Sky Deutschland and Sky Italia to £400 million by 2020, from £200 million by 2017, and said it would separately reduce costs by 2-3 per cent of sales next year.

Although both Sky Italia and its Sky Deutschland operation in Germany and Austria are growing, most of its revenue and its profit still come from the UK and Ireland. Its operating profit for the UK and Ireland arrived at £1.5 billion, up 11 per cent.

In Ireland, it launched the upgraded, higher-cost platform Sky Q, while it also added a Sky Kids app. This summer it has made Ultra HD picture quality available to Sky Q customers and also run a marketing campaign around the rebranding of Sky Movies as Sky Cinema. It has yet to launch Now TV, its lower-cost internet television subscription service, in this market.

Sky said on Thursday it would extend its “buy and keep” service from movies to box sets, while earlier this week it also announced a media partnership with Twitter that will see video clips of Premier League matches available on the social media network via the @SkyFootball account. – (Additional reporting: Reuters)