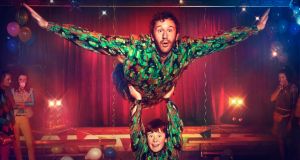 Chris O’Dowd and David Rawle in Moone Boy: the sitcom about growing up in the 1980s and 1990s in Boyle, Co Roscommon has been a big hit for Sky

Sky Ireland has made a number of changes to its management team as parent company BSkyB seeks to increase its revenue through a “multi-product growth strategy” in the Republic.

The satellite television provider, which employs more than 900 people in its Dublin offices, has appointed Neal O’Rourke as director of finance and Ann-Marie MacKay as director of product and customer growth.

Sky Ireland’s director of sales of marketing, Mark Anderson, is leaving the company after four years in the role.

O’Rourke has been appointed from Aer Lingus, where he has most recently served as commercial director. He will be “responsible for providing financial and commercial leadership to the Irish business” of BSkyB.

MacKay is joining Sky Ireland from O2, where she was head of consumer marketing. She previously worked for Coca-Cola Ireland and Diageo.

She will be responsible for customer acquisition and retention as well as driving Sky’s average revenue per customer through package upgrades.

While BSkyB does not publish separate figures on its customer base for the UK and the Republic, data from AC Nielsen suggests more than 700,000 households in the country have a Sky box, making it the largest pay-TV provider in the Republic.

Sky Ireland launched broadband and home phone services 18 months ago and the latest ComReg report, for the second quarter, suggests it has taken a 6.6 per cent share of the fixed-line broadband market to date.

It will be keen to grow that share in the months and years ahead.

As part of its ongoing marketing campaign, Sky Broadband recently renewed its sponsorship of RTÉ’s Late Late Show for a second season.

The FTSE 100-listed BSkyB is 39 per cent owned by Rupert Murdoch’s 21st Century Fox. Its main competitors in Ireland are cable company UPC, which is owned by John Malone’s Liberty Global, and Eircom, while for content it competes with all domestic broadcasters, notably Setanta Sports.

Other than adding to its customer base through promotion of its broadband services, Sky’s main avenue of revenue growth is to encourage more of its existing television customers to pay higher premiums for sport, movie and high-definition options.

Although Sky’s GAA matches were not watched by a large audience in the Republic when compared with the numbers who view the coverage on RTÉ and other free- to-air channels, the acquisition of the rights is understood to have provided a customer recruitment boost over the summer.