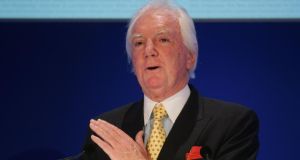 Sir Anthony O’Reilly is locked in negotiations with AIB in relation to his multimillion euro debts. Photograph: Alan Betson

Sir Anthony O’Reilly is locked in negotiations with AIB in relation to his multimillion euro debts in advance of the State-controlled bank seeking a summary judgment against him at the High Court next week.

The one-time billionaire is being represented in the talks by Bernard Somers, a debt restructuring specialist and former non-executive director of AIB. Mr Somers is a close associate of Sir Anthony.

A case has been listed for entry into the Commercial Court on Monday between AIB and Sir Anthony and two of his investment vehicles, Indexia Holdings and Brookside Investments.

Brookside owns Sir Anthony’s coastal estate in Glandore, Co Cork, while Indexia is his private investment vehicle that holds his near 5 per cent stake in Independent News & Media and his share of the oil explorer Providence Resources.

Debt The precise size of Sir Anthony’s debt to AIB is unclear. It exceeds €4 million but informed sources yesterday suggested it could be significantly more.

Earlier this week, The Irish Times revealed AIB is trying to force Sir Anthony to immediately repay loans secured on his holiday home in Glandore, and that he is selling his Georgian property in Fitzwilliam Square and also the six-acre estate in west Cork called Shorecliffe.

Sir Anthony was once one of Ireland’s richest businessmen. He made his name running HJ Heinz in the United States and later became the major shareholder in Waterford Wedgwood and Independent News & Media.

His interest in Waterford was wiped out when it collapsed in 2009 and his family lost control of INM in 2012 following a long-running battle with Denis O’Brien.

He previously owed the former Anglo Irish Bank about €60 million, although these loans – since bought by Lone Star – were reduced to about €35 million when he sold his stake in smart meter company Landis+Gyr.