‘Serial’ podcast to be broadcast every two weeks

Move to accomodate additional reporting and a longer season, according to producer 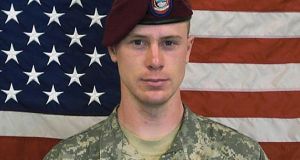 Sgt Bowe Bergdahl, who is the subject of the current Serial podcast.

At the beginning of every episode of Serial, the host, Sarah Koenig, opens with these words: “From This American Life and WBEZ Chicago, it’s ‘Serial,’ one story told week by week.”

Well, make that every other week. In an unexpected development, the second season of Serial, which is about US army sergeant Bowe Bergdahl, is moving to a fortnightly broadcasting schedule.

The fifth episode of the podcast, which had been scheduled for Thursday, will instead become available on January 21st, and that biweekly schedule will continue for the rest of the season.

Julie Snyder, an executive producer of Serial, said in an interview on Tuesday that a 14-day window between episodes was needed to accommodate additional reporting and a longer season than she anticipated. “There are more paths we need to go down,” Ms Snyder said. “Since we started broadcasting the show, we have gotten more people willing to talk, and because of that, it has opened up more avenues of reporting.”

She declined to comment on whom those interviews were with, or what additional reporting the show needed to pursue. “We have narrative developments,” she said. “I hesitate on calling them news developments.”

The first season of the podcast was a smash hit with listeners and earned a Peabody Award for its examination of a 15-year-old murder case involving high school students in Baltimore County.

This season, Serial is tackling the much more prominent case of Sgt Bergdahl, who walked away from his army base in Afghanistan in 2009 and was held in captivity by the Taliban for five years.

Since Sgt Bergdahl’s release last year, in return for five Taliban detainees, he has been the subject of enormous controversy. Many on the right accuse him of desertion.

In interviews with Serial, the first Sgt Bergdahl has given since being released by the Taliban, he has described his reasons for walking away from his army base, his attempts at escape and the brutal conditions of his captivity.

The podcast’s timing has been opportune: After the first episode, general . Robert Abrams, head of army forces command at Fort Bragg, North Carolina, ordered that Sgt Bergdahl face a court-martial on charges of desertion and endangering troops.

But despite the fact that Serial has tackled a widely known topic, this season has failed to generate the same kind of intense interest the first one did. The change to a fortnightly schedule risks further blunting momentum.

“I have definitely noticed it and I was definitely prepared for it,” Ms Snyder said of the season’s relative lack of buzz. “So much of the story of season one was about us. There was a lot of coverage about, ‘What is this? Have you heard it?’ We’re not a new story anymore.”

Still, Ms Snyder pointed to numbers that indicated Serial was still attracting plenty of listeners and, at least on a weekly basis, more than last season. The first episode of this season was downloaded about 3.4 million times in its first week, a figure that did better than the first seven-day total of every episode last season, including the season finale.

Additionally, the second season of Serial has been downloaded five million times on Pandora, according to a company spokesman. The bulk of the listeners in the first season, however, listened after the season was over, Ms Snyder said. And there are signs that the show is flatlining.

The number of downloads for the second episode this season was 3.1 million in its first week run, while the third episode was downloaded 2.8 million times. (Serial projects that the fourth episode will have about 3.1 million downloads.)

Ms Snyder said the download figures bolstered her confidence that listeners would remain engaged, even with additional time between episodes. “I thought the numbers were really solid considering this wasn’t a whodunit story like last season,” she said. “I’m not anticipating a drop-off. I think we’re good.”

1 My aunt never told us that Gran passed away with no will
2 Green Party TD queries ‘usefulness’ of another appeal in €13bn Apple tax case
3 If it’s safe to do so, could this be the time to spend for Ireland?
4 Government to push through €2bn credit guarantee scheme next week
5 Brussels plans attack on low-tax member states
6 The $6bn judgment pitting Nigeria against Irish businessmen
7 Covid anxiety among domestic holidaymakers could sink this summer
8 Majority of employees don’t want to return to pre-Covid working patterns
9 Owners of Cork shopping centre sue for €30m after car causes fire
10 Datalex shares slide almost 24% as trading suspension is lifted
Real news has value SUBSCRIBE