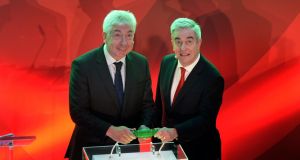 Tom McFeely, the bankrupt property developer and former IRA hunger striker, says he survives on welfare from the British state, according to legal documents reported by the Sunday Business Post.

The developer of Priory Hall, who has debts of €280 million, last week had his bankruptcy extended by a further five years after a judge ruled he was not co-operating with the process.

The Sunday Business Post also reports that Aldi is entitled to seek information from Dunnes Stores about the secretive Irish retailer’s profitability as part of the assessment of damages in a case in which Dunnes was found to have breached trademark rules.

Stobart Air will axe three routes from Dublin to Britain as part of a deal with Aer Lingus, the Post also reports. The paper says Stobart has confirmed that the Aer Lingus regional routes it operates from Dublin to East Midlands, Doncaster and Cardiff will cease on November 1st.

The Sunday Times reports that Eir will this week meet “senior Government officials” over its row with wholesale broadband customers, which have accused the telco of favouring its own retail division over them. Eir chief executive Richard Moat wrote to the Government to express concern that the row might damage Eir’s reputation.

The Sunday Times also reports that listed agrifoods group Donegal Investment is to sell An Grianán, one of the country’s largest farms, for up to €20 million. The 2,400-acre estate in Donegal has a herd of 500 cattle and comprises 1,900 acres of farmland and 500 acres of lake. Savills has been appointed to handle the sale.

IBRC liquidators are preparing to sell €30 million in loans linked to former Anglo Irish Bank chairman Sean FitzPatrick’s share of a Nigerian oilfield investment, the Sunday Times says. The loans for the Ekeh field in the “volatile” Niger delta could be sold by the end of the year.

The Sunday Independent says former minister of State Conor Lenihan is on the founding committee of a private members’ club on Lambay Island in Dublin. The Island Club, founded by members of the Revelstoke family that owns the island, will be “a place for the bold and inquisitive to imagine, discuss and create”.