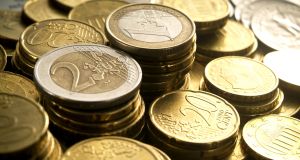 The media report says that all the IBRC borrowers involed were commercial borrowers and do not include Irish Nationwide mortgage holders. Photograph: iStockPhoto

More than 1,000 borrowers owing €9 billion to Irish Bank Resolution Corporation were paying interest rates on their loans of less than 2 per cent at the time the bank entered liquidation in 2013, according to the Sunday Business Post.

The paper says that they were all commercial borrowers and do not include Irish Nationwide mortgage holders.

The paper also reports that the estimated €500 million sale of the Mater Private hospital to NetCare, a South African company, has been shelved.

The Post speculates that the deal fell down at a late stage because the vendors were unsatisfied with the price. However, it is suggested that a management buyout of the hospital is still a possibility.

The Sunday Times says that Robert Watt, currently the secretary general of the Department of Public Expenditure and Reform, has emerged as the leading candidate to replace Patrick Honohan as governor of the Central Bank.

An open competition for the role will be held, however, the Times says that highly-regarded administrator Watt is a strong contender because of the need to restructure the bank’s unwieldy organisational structure.

Liberty Global is the owner of both UPC and Virgin Media.

The Sunday Independent reports that billionaire hedge fund manager Crispin Odey has placed a large financial bet that the share price of Bank of Ireland will fall, against the backdrop of the current euro crisis.

All such “short” positions, as they are known, must be notified to the Central Bank, which has recorded Odey’s bet in official figures.

The paper also reports that Saudi Arabia, which is the world’s top oil producer, is preparing to ramp up production to maximum levels, which should see a further dip in the price of oil.

Goldman Sachs and Citigroup are both predicting that it will head towards maximum production levels later this year.

This increase from Saudi Arabia will be in an effort to further restrain growth in other producing nations, such as the US and Brazil.

Irish economy to grow by 3.4% this year, predicts EY 00:09
Belfast Harbour seeks to develop six new film and television studios 00:01
Your business week: all the results, indicators and meetings 18:00
Should AIB compensate me for upsetting letter on arrears? 16:00
Chris Johns: The Johnson administration will spend, and needs a quiet Treasury 15:01
Search executive
jobs on irishtimes.com