Rupert Murdoch’s six children each to get $2bn windfall 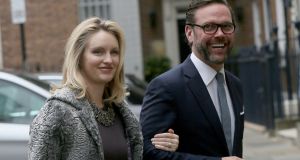 Rupert Murdoch’s six children are each in line to receive $2 billion (€1.7 billion) from the break-up of his media empire and the sale of his entertainment businesses to Walt Disney, said multiple sources.

The figure is derived from the 17 per cent interest in 21st Century Fox held by the Murdoch Family Trust, which is worth $12 billion at the $38 a share Disney has agreed to pay. Disney’s offer for businesses that include the Fox movie studio, portfolio of cable channels and Star of India is worth $71.3 billion.

The $12 billion figure does not include the Murdoch family’s stake in News Corp, the owner of newspapers such as The Sun and Wall Street Journal, or its holding in New Fox, the company being spun out of 21st Century Fox - and which owns the Fox News Channel and the Fox broadcast network. It does include Fox’s interest in Sky, which Disney agreed to sell to Comcast when the cable group recently won an auction for the European media group.

Disney’s offer for the 21st Century Fox businesses allows investors to choose a mix of cash and Disney shares, but it is unclear whether Mr Murdoch will allow his adult children to choose their own mix. The 87-year-old mogul has no financial interest in the trust, but he does control it. He could not be reached for comment; Fox declined to comment on matters relating to the trust.

Mr Murdoch and his eldest son, Lachlan, will continue to work together following the break-up of Fox, with Lachlan appointed chairman and chief executive of New Fox and Mr Murdoch co-chairman.

The sale to Disney and Comcast’s recent victory in the auction for Sky represents a parting of ways between Mr Murdoch and his youngest son, James, currently 21st Century Fox’s chief executive. The younger Murdoch has sounded out friends about starting a technology fund. He is also an independent director of Tesla and is the favourite to land the chairman’s job when Elon Musk steps down in mid-November as a condition of a settlement with the Securities and Exchange Commission.

Mr Murdoch’s eldest daughter, Prudence, has no executive role with any of his businesses. His daughter Elisabeth used to work for the family company and also sold Shine, a television production business that she founded and which was later merged with Endemol. She is the founder of Vertical Networks, a media start-up that produces short-form video for platforms such as Snapchat.

Grace and Chloe Murdoch, Mr Murdoch’s youngest children, who are school age, with their stakes in the family trust managed by trustees appointed by the mogul and Ms Deng. Ivanka Trump was a trustee for the girls but stepped down shortly after her father, Donald, was elected US president in 2016. – Copyright The Financial Times Limited 2018