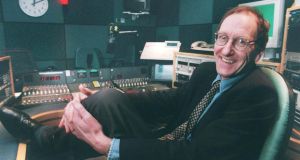 John Clarke: new show is due to air on Sunday mornings on Radio Nova from September 27th. Photograph: Bryan O’Brien

Mr Clarke, who left 2fm as part of the shake-up of the station last year, was originally due to host what was meant to be a once-off Sunday requests show on Radio Nova in July, but it was pulled at the last minute following a legal threat from RTÉ over the use of the name Ireland’s Biggest Jukebox.

Radio Nova chief executive Kevin Branigan said the station was “of a mind” to still call Mr Clarke’s new regular show Ireland’s Biggest Jukebox, despite the legal letter that led to the cancellation of the July programme.

Radio Nova does not accept that RTÉ owns the name, which is not a registered trademark. RTÉ has not responded to his letter of six weeks ago seeking clarity on the issue, Mr Branigan said.

“We are prepared to go ahead with the show with John and we won’t be prevented this time around,” Mr Branigan said. Its title has not yet been decided.

RTÉ said the dispute about the use of the name was “currently being handled by representation between RTÉ and Radio Nova” and it could not comment on the process.

Mr Clarke’s show is due to air on Sunday mornings on Radio Nova from September 27th. The rock-focused station holds an FM licence for the greater Dublin area.

“John is a radio DJ in the true sense of the word in that he has no agenda other than playing records for listeners. We want that connection that he has with his audience,” Mr Branigan said.

The DJ was head of 2fm for 11 years until 2009. His subsequent daytime Sunday show came to an end in February 2014 after the current head of 2fm, Dan Healy, implemented a broader shake-up of the station, which has been losing rather than making money for RTÉ. Mr Clarke quit on air, telling listeners that “my interest in music cannot be accommodated here”.

Meanwhile, the evolution of 2fm’s schedule continues with former Spin 1038 breakfast co-host Tracy Clifford taking over from Rick O’Shea in the weekday afternoon slot from today.