But there will ‘always be a need for checks and balances’, says INM’s Vincent Crowley 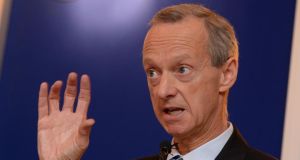 Outgoing INM chief executive Vincent Crowley: “There is always going to be a need for checks and balances between the person writing the thing and it appearing in the paper.”

Subediting roles related to print production have taken the greatest hit in the various rounds of redundancies across the newspaper industry in recent years, and Independent News & Media (INM) has singled out the area for yet more cuts in 2014.

Under a €9 million cost-reduction scheme code-named Project Quantum, subediting and print production have been identified as INM’s main targets for savings, with some of the money set to be reinvested on the digital side of its business.


Impact
The “major impact”, according to outgoing INM chief executive Vincent Crowley, will be the closure of the Dublin office of outsourcing company Real-Time Editing & Design (RE&D), which was announced in January with the loss of 50 jobs. From here on, the process of cost retrenchment “gets more subtle”, he says, because the remaining targets are “less obvious”.

But is Crowley, who professed himself “bullish” on the future of print, confident that the traditional role of “subeditor” will survive?

“Titles will only get you so far in this. It’s really about what activities the person is doing,” he says.

“There is always going to be a need for checks and balances between the person writing the thing and it appearing in the paper. The question is how to make that process more efficient.”

1 Should my mam wait for house prices to drop before buying?
2 Brother is dragging his heels as executor of uncle’s will - is there anything I can do?
3 Hangover for the drinks sector as pint sales go flat
4 Covid-19 mortgage breaks: What’s the catch?
5 Almost 70% of home buyers to purchase within next year
6 Health insurance customers to get €180m in refunds
7 Revenue faces US drug company Perrigo over disputed €1.64bn tax bill
8 Cheers: Conor McGregor's whiskey races up the sales chart
9 Dublin drops out of top 50 in ranking of best cities for start-ups
10 Supermarkets see fastest pace of sales growth in 15 years
Real news has value SUBSCRIBE