O’Brien and McKillen business links on wrong side of right to know, says judge 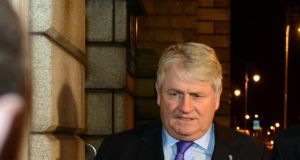 Denis O Brien: newspaper sought to publish on the commercial relationship between him and developer Paddy McKillen. Photograph: Cyril Byrne


Information that the Sunday Times sought to publish on the commercial relationship between developer Paddy McKillen and billionaire Denis O’Brien are matters that “just fall on the wrong side” of the kind of material to which the public has a right to know, the judge in the injunction case taken against the newspaper decided.

Publishing the internally expressed opinions of Irish Bank Resolution Corporation (IBRC) officials would have been “a step too far”, Mr Justice Colm Mac Eochaidh also said, in a written judgment published by the Courts Service on Friday night.

Public interest
“ The Sunday Times has not persuaded me that there is a public interest in that sort of opinion on behalf of the bank.”

The temporary order prohibiting the publication of the confidential material was granted in the High Court on March 30th after a seven-hour emergency hearing following an application brought by Mr McKillen and Mr O’Brien. No date has been set for the full hearing.

The judge did not grant an injunction restraining the Sunday Times from revealing a loan agreed by IBRC to Mr McKillen shortly before he faced a deadline to pay a £5.9 million legal bill. However, the newspaper did not publish this part of its investigation until yesterday, saying it could not be presented “in an intelligible form” before the court’s written judgment was released.

Mr Justice Mac Eochaidh said the issues arising in the injunction case are “delicate and touch upon matters of great public importance”. He weighed up what he described as the “competing rights” of the case.

“On the one hand, the Constitution guarantees freedom of expression to the Sunday Times , but perhaps more important than the Sunday Times ’ own constitutional right to freedom of expression is the public right in the free press.” The public had “an extraordinary interest in there being a free and untrammelled press entitled to comment on all matters that are genuinely of public interest as opposed to matters of mere public prurience or curiosity”, the judge said.

But he also noted that it was “well established” that the public, and not just the plaintiffs, had an interest in the maintenance of confidential banking relations. “To put it bluntly, no one would like to see their banking details on the front page of any newspaper and therefore there is a public interest in protecting and upholding those confidences.”

Mr Justice Mac Eochaidh said the courts were “slow to restrain publication”, but that the courts “accept the need to protect the confidential relations between banks and their customers.” He added that the Sunday Times had not “seriously denied” that the information is confidential.

The defendants in the injunction were Times Newspapers Limited and journalist Mark Tighe. Their legal representatives argued that there was “a public interest of real and weighty nature in publishing information about the manner in which the bank in question deals with one of its most significant debtors”, in light of the State bailout of Anglo Irish Bank (now IBRC).

However, the judge accepted that the plaintiffs had established that “irreparable harm” would be done to the two businessmen if the newspaper was allowed to publish the information.