Newspaper sales decline in first half of 2016 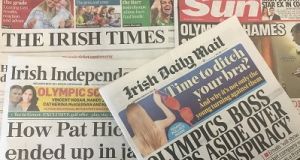 Newspaper sales fell further in the first half of 2016. The circulation of daily print titles was 5.7 per cent lower than it was in the same period in 2015, while the Sunday print market retreated 6.3 per cent.

Newspaper sales fell further in the first half of 2016. The circulation of daily print titles was 5.7 per cent lower than it was in the same period in 2015, while the Sunday print market retreated 6.3 per cent.

This marked the continuation of a pattern of declining print circulation that dates back to 2007, figures from the Audit Bureau of Circulations (ABC) show.

The print circulation of The Irish Times now stands at 72,011 copies, down 5.5 per cent year on year.

The Irish Times Digital Edition (a digital replica of the daily newspaper) had daily sales of 9,875 for January-June of 2016, which was more than double the figure for the first half of 2015.

The 103 per cent growth in digital edition sales meant the combined sale for the print and digital editions of The Irish Times grew 1 per cent year on year, arriving at 81,886.

In February 2015, the company introduced a metered paywall and new subscription packages.

The Irish Examiner now sells an average of 30,964 copies, down 6.7 per cent, while sales of Cork’s Evening Echo, which like the Irish Examiner is owned by Landmark Media Investments, declined 10.6 per cent to 10,976.

The two titles, owned by Rupert Murdoch’s News Corp, ran a half-price promotional offer in June, which contributed to their circulation gains.

Elsewhere in the Sunday newspaper market, the biggest seller remained the Sunday Independent, but its circulation dropped below the 200,000 mark. Its sales of 199,210 are 6.7 per cent lower than in the first half of 2015.

The circulation of the Sunday World, which is also owned by Independent News & Media (INM), fell 8.9 per cent year on year to 162,938.

Sales of the Sunday Times, which is part of Rupert Murdoch’s company News UK, fell 6.4 per cent year on year to 77,455. The Sunday Business Post’s circulation is 3.5 per cent lower than it was a year ago at 31,364.

Some 465,566 newspapers are sold each day in the daily newspaper market, the ABC figures for the period show, while total circulation in the Sunday market arrives at 669,557.