Netflix blames competition and churn for dive in profits 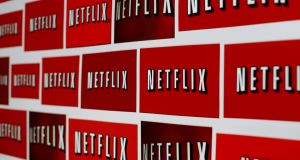 Outside the US, Netflix beat its expectations for growth, adding 2.74 million international streaming subscribers

Netflix has hit a bump in the road as it pushes ahead on its quest to reach 60 million to 90 million subscribers in the US and, by the end of 2016, become fully global.

The company said third-quarter profit tumbled 50 per cent compared with last year, missing its forecasts as it reported worse-than-expected streaming growth in the United States. Netflix said it added 3.62 million total streaming members during the quarter, as it continued its aggressive global expansion and investment in original programming. That brings the total number of paid streaming members to 66.02 million, up from the 50.65 million during the same period in 2014.

In the US, Netflix missed its forecasts for subscriber growth. The company added 880,000 subscribers during the quarter, less than the 1.15 million net additions it had expected. Its total paid membership count in the country is now 42.07 million, short of its forecast of 42.51 million.

Netflix said it had missed its growth expectations because it failed to factor in the “involuntary churn” related to the transition to new chip-based credit and debit cards. Executives said that account numbers could change when the cards were replaced, which made it more difficult for members to renew their subscriptions.

Netflix also faces fierce competition from streaming rivals like Amazon, HBO and Hulu, which are significantly increasing their investments in programming and other services. Amazon, for instance, added a feature during the quarter that lets subscribers download videos, and Hulu added an ad-free service.

Executives said that despite missing its forecasts, Netflix remained on track to reach its goal of having 60 million to 90 million members in the US because of the continued growth of Internet television. “Sure there are a lot of competitors, but there always have been,” Reed Hastings, Netflix’s chief executive, said on the earnings call. “We’ve competed against cable and satellite. We’ve competed against YouTube and all kinds of pay-per-view and DVDs. So there are a lot of ways to consume entertainment, and despite all of those, Netflix keeps growing because we keep improving.”

Outside the US, Netflix beat its expectations for growth, adding 2.74 million international streaming subscribers. That brought its total international paid membership to 23.95 million. During the quarter, Netflix started its service in Japan, and it expects to expand its service to Italy, Portugal and Spain next week.

Net income for the quarter was $29.4 million, down from $59.3 million during the same period last year. The company had forecast net income of $31 million. Netflix has told investors that it will break even until the end of 2016 as it pushes ahead with its plans to make its streaming service available around the world by the end of next year. The company still expects to deliver material global profits after that period of expansion. On Wednesday, Netflix said that it was likely to raise additional capital next year to fund its investment in content.

Total revenue was $1.74 billion in the third quarter, up about 23 per cent from the same period last year. Netflix shares closed slightly higher Wednesday, at $110.23, but fell more than 3 per cent in after-hours trading. So far this year, Netflix shares are up about 125 per cent, as investors bet on the company’s continued growth in the US and abroad.

A week ago, Netflix announced a $1-a-month increase, to $10, in the US for its most popular plan, which offers two simultaneous streams. Other plans remained unchanged at $8 and $12. Netflix also raised prices in Europe and Latin America in recent months.

The company did so “to improve our ability to acquire and offer high-quality content, which is the No. 1 member request,” Hastings said in a letter to shareholders.

Netflix continues to put a priority on its original programming. During the quarter, a number of Netflix original productions made their global debut, including Wet Hot American Summer: First Day of Camp, a series that is a prequel to the similarly titled 2001 film, and Narcos, a drama about the Colombian drug kingpin Pablo Escobar. On Friday, Netflix’s first original feature film, Beasts of No Nation, about a child soldier in West Africa, is scheduled to make its debut.

Yet programming from other outlets remains an important part of the Netflix service both in the US and internationally. In recent weeks, some media executives and industry analysts have expressed worries about licensing shows to Netflix. The fear is that doing so cannibalises traditional television ratings and advertising revenues.