It was the year Bono said ‘oops’, nobody died at Today FM and Insomnia served coffee on ‘tap’ 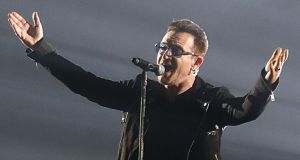 Bono: “oops” – how Bono began his apology for the Apple stunt in which U2’s ‘Songs of Innocence’ album was automatically downloaded to iTunes accounts. Photograph: Danny Lawson/PA Wire

A is for Adnan Syed. Convicted of the 1999 murder of Hae Min Lee, the Baltimore man’s case is the subject of this year’s most talked-about investigative journalism, the podcast Serial.

B is for beard. The hipster super-beard found its way into advertising copy, via a humour injection into Eagle Star’s “dear 30-year-old me” campaign. Yes, the pension was almost certainly one of that guy’s better decisions.

C is for challenge. Over to 2fm presenter Chris Greene: “I nominate you for the ‘give quietly to charity every month via direct debit from your bank account’ challenge.”

D is for defection: Ray D’Arcy abruptly signed off from Today FM to return to RTÉ, leaving a crater behind him. “Nobody has died here,” Ian Dempsey insisted.

E is for editors. In the newspaper business, they came and they went – even Guardian leader Alan Rusbridger stepped down to spend more time with his piano.

F is for “Feeling good starts from within”. So claimed the truthfully-hipped pop star Shakira, the unlikely celebrity endorser of Danone’s Activia yoghurt.

G is for Gone Girl. “The Gone Girl effect: How well do you really know your partner?” This MailOnline headline was sponsored by 20th Century Fox, as native advertising became part of the movie marketing mix.

H is for hoedowns. Country FM, which bid for the radio licence held by Sunshine 106.8FM, said it would earn cash from monthly “country dances”. The broadcasting regulator mustn’t have fancied it, as its application was unsuccessful.

I is for insomnia. After Alan Shatter suggested unexplained access to the wifi in the Garda Ombudsman offices could be linked to a ground-floor Insomnia café, the chain delighted in tweeting that it was “Serving coffee and wifi on ‘tap’.”

J is for @JohnLewis. Laughing at what American computer science professor John Lewis says to those who tweet him thinking he’s a department store is now an annual tradition greater than the John Lewis Christmas ad itself.

K is for Karl Stefanovic. To prove a point about media sexism, the male anchor on Australia’s Channel 9 Today programme, revealed he wore the same suit on air for a year. “No one has noticed, no one gives a shit.”

L is for low places. Garth Brooks has got friends in them, but he hasn’t got many left in Ireland after a Croke Park debacle that kept the Irish media going for half the summer.

M is for money back if he walks. Paddy Power had some marketing fun with the Oscar Pistorius media circus. Hey, wasn’t that a murder trial?

N is for Nidge. Love/Hate’s central character probably won’t rest in peace, but the insanely popular RTÉ drama seems to be done for, for now.

O is for “oops”. How Bono began his apology for the Apple stunt in which U2’s Songs of Innocence album was automatically downloaded to iTunes accounts. “What is a U2 and why is it my phone?!” is not the best review ever.

P is for #PantiGate. In January, drag performer Rory O’Neill appeared on RTÉ’s the Saturday Night Show and answered Brendan O’Connor’s questions on homophobia. There may have been some fallout.

Q is for Q102. It’s “better than listening to your partner”, according to an advertising slogan unveiled by UTV Media’s easy-listening Dublin station.

R is for red tops. It was “ a great day for them”, the Sun declared over a picture of its former editor Rebekah Brooks, after she was acquitted of all charges at the phone hacking trial.

S is for SodaStream. Scarlett Johansson quit her role as an Oxfam ambassador after the charity objected to her appearance in ads for the company, which has a factory in an Israeli settlement in the West Bank.

T is for TXFM, formed from the ashes of Phantom, a radio station that Today FM boss Peter McPartlin said potential listeners had regarded as “a club they weren’t allowed into”.

U is for UTV Ireland. The channel headed by Mary Curtis is warming up for some New Year’s Day champagne-corking after a year it described as “frantic”.

V is for Vice. A clutch of newish US media companies went out and raised up to about $50 million this year. Not Vice Media: It raised closer to $500 million.

W is for WhatsApp. Founders Jan Koum and Brian Acton were both rejected when they applied to Facebook for jobs five years ago. In 2014, they sold their messaging company WhatsApp to Facebook for $19 billion.

X is for X Factor. The third-placed act in the 2010 series, One Direction, continues to shift posters for bedroom walls and throw a five-headed shadow over all other hopefuls.

Y is for YouTube. A giant mutant spider dog, the work of a Polish prank video maker, was the most-watched video on the Google-owned network this year, racking up more views than the Nike World Cup ad, which just possibly had a bigger budget.

Z is for Zombies. Zombies had an “off” year, but their cousins the black-eyed ghost children were sighted on some tabloid front pages.