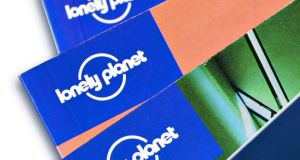 Travel guide publisher Lonely Planet has been acquired by US digital marketing group Red Ventures for an undisclosed sum.

North Carolina-based Red Ventures said it had acquired Lonely Planet from its current owner NC2 Media and was aiming to propel it into the digital era while “remaining committed to publishing the guidebooks that have made Lonely Planet the iconic brand it is today”.

“While the travel industry is experiencing an unprecedented downturn, we believe it will come back stronger than ever, and no brand represents the magic of the modern explorer better than Lonely Planet,” Red Ventures co-founder and chief executive Ric Elias said.

As the pandemic hit in March and April, Lonely Planet announced office closures and redundancies across the group, including several at its Dublin office. While the company said it would continue publishing its country guidebooks, it cut back several ancillary services.

The swift action was, according to the company, “about ensuring Lonely Planet can continue in a much-changed industry”.