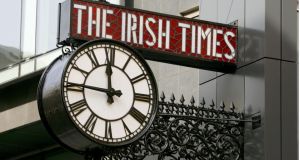 ‘The Irish Times’ has the highest total audience in Dublin of any daily title, with 194,000 Dublin-based adults reading the title in print or online. Photograph: David Sleator

The average daily readership of The Irish Times and irishtimes.com is 427,000, up 10 per cent year on year, according to the latest snapshot of trends in the industry.

The survey, which is conducted by research company Millward Brown on behalf of member titles of NewsBrands Ireland, the new name for the National Newspapers of Ireland group, shows that four in five adults, or about 3 million people, read its titles regularly, either in print or online.

Some 720,000 people access newspaper titles online, up 27 per cent on the previous year, according to NewsBrands Ireland, which described this as a “significant increase”.

Although Sunday newspaper readership has declined, overall print readership has “remained relatively consistent”, it said. There is also a high crossover in the readership between print and online. Seven in 10 people who consume titles online also read a printed product.

“The world is saturated with content and the way people choose to read news content continues to evolve,” said Vincent Crowley, chairman of NewsBrands Ireland and former chief executive of Independent News & Media.

The survey is primarily completed for the benefit of advertisers, and Mr Crowley said the time readers “clearly invest” in reading NewsBrands Ireland’s products provided “the perfect backdrop for advertising”.

The Irish Times has the highest total audience in Dublin of any daily title, with 194,000 Dublin-based adults reading the title in print or online. Some 80 per cent of the print readership of The Irish Times belongs to the ABC1 social group that advertisers like to target.

The JNRS report shows the Irish Independent has a combined print and online readership of 688,000. The Irish Examiner’s readership is 236,000, while the Irish Daily Mail’s is 217,000.

The Sunday Business Post is read by 113,000 people, while weekly title the Irish Farmers’ Journal has 247,000 readers.

The JNRS study does not measure the readership of news sites not currently members of NewsBrands Ireland, such as RTÉ.ie and TheJournal.ie.

NewsBrands Ireland has recently been talking to media agencies and advertisers as part of a review of how it conducts its readership survey.

1 Farmer seeks to challenge €3.6bn Intel plan in High Court
2 Council tells Johnny Ronan firm to keep the noise down at D4 Embassy venue
3 Fallon & Byrne founders McHugh and Byrne exit group
4 Paschal Donohoe's biggest regret: 'Not managing the National Children’s Hospital better'
5 Cosgrave should give his speech to Web Summit’s partners in Saudi Arabia
6 Election proposals may make the housing crisis worse
7 Who are Ireland’s 17 billionaires?
8 European shares up as investors bet on economic uplift in 2020
9 RTÉ set to spend €350k on hotels – but celebs will have to buy their own alcohol
10 My father in a nursing home wants to gift me his house
Real news has value SUBSCRIBE

US treasury secretary Mnuchin expects next China trade talks in ‘near future’ 20:53
Davos closes with US signalling hope on China trade talks 20:53
Explorer Petrel gets wider injunction to block sale of shares 20:33
Council tells Johnny Ronan firm to keep the noise down at D4 Embassy venue 20:29
European shares up as investors bet on economic uplift in 2020 20:08
Search executive
jobs on irishtimes.com