If every week is Seachtain na Gaeilge on RTÉ, do we need TG4?

The national broadcaster plans to ‘normalise’ Irish within programming 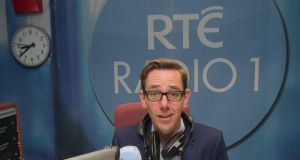 “All this – and RTÉ says there are 93 new action-points in the Meáin Ghaeilge RTÉ, Action Plan 2015-2019 plan – does rather give the impression that every week will be Seachtain na Gaeilge out at Montrose.” File photograph: Gareth Chaney/Collins

Reading that RTÉ’s 2fm is to offer bilingual English-Irish news bulletins reminded me of those cooking-for-toddler days. There are entire books devoted to recipes offering clever (smug? annoying?) ways to disguise vegetables. Making a tomato sauce? Add spinach and blitz it, they’ll never know; Baking muffins? Grate those carrots in! – and on it goes until there’s a revolting recipe for ice-cream involving broccoli.

All the ideas are based on the received wisdom that toddlers hate vegetables, but as vegetables are good for them, as a parent, it’s your job to get them down their throats and the only way is if they are disguised. In a similar way 2fm listeners are to get a bite-sized serving of Irish with their news. You could say of course that if a listener really wants nuacht instead of news, all they have to do – and these are young, media savvy types who know their way around the airwaves – is turn the dial a fraction to RnaG. Could it be that these listeners simply don’t know what’s good for them so it has to be dished up in an easily digestible format? Or as it’s RTÉ, is it simply the State broadcaster finding innovative ways to fulfil its statutory public service remit in relation to the promotion and support of the Irish language and our heritage?

The bilingual bulletin idea is just one small element of the newly released Meáin Ghaeilge RTÉ, Action Plan 2015-2019 which lays out how the broadcaster is going to support and promote the Irish language. At its launch, Noel Curran, director-general of RTÉ, said: “with this plan we pledge to bring the Irish language to the centre of what we do, to normalise it within programming and events, and extend its reach across digital and social media.”

Other interesting proposed initiatives include a youth-orientated Irish-language radio service which would be an opt-out on RnaG, with playlists from 2fm, presented as Gaeilge. And anyone who has ever listened to the charts in Irish on Spin knows this works perfectly well.

All this – and RTÉ says there are 93 new action-points in the plan – does rather give the impression that every week will be Seachtain na Gaeilge out at Montrose. As viewers and listeners know that is that fortnight around St Patrick’s day when as well as some Irish language programming, the cúpla focal features in most live programmes. But what then about TG4? Does it push the station further into niche minority territory? If the language is going to be more fully integrated into RTÉ One and 2 programming then who is TG4 for? Are there really that many Irish language speakers who need an entire station for themselves if the language can be blended creatively into RTÉ and RTÉ2?

At a time of limited resources for all broadcasters does it make sense, for example, to help fund a drama such as An Klondike (its total budget was €1.6 million) when so few people will end up watching it? This at a time when RTÉ One for example has so little new drama – pleading budget restraints – and when it does air any Irish made drama, no matter the quality, ratings go through the roof such is the demand.

There’s something in the action plan that should – but probably won’t – be of particular interest to advertisers: “Advertisers and advertising agencies will be incentivised and supported to provide advertising in Irish on television, radio and digital”. Twenty-five years ago, when I worked in advertising as a copywriter, there were real incentives such as a 5 per cent discount in media charges – a bit like getting bonus points in the Leaving for doing it through Irish. It didn’t mean that ads were made in Irish or there was any real commitment to the language or culture – it just meant that a few ads had their end slogan or voiceover translated. It died out, probably because the 5 per cent wasn’t worth the hassle - and there was little demand for it, from anyone.

Cider sales fizzle out even as exports jump on Brexit stockpiling 12:08
Stock market rally holds as investors cling to recovery hopes 12:03
Unemployment rate remains at near record 26.1% in May 11:52
Bank of England tells banks to get ready for no-deal Brexit 11:11
More than 2m people use website that shows lockdown distance limits 10:35
Search executive
jobs on irishtimes.com