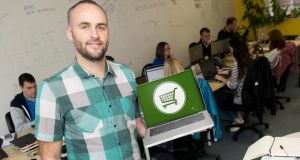 Wolfgang Digital’s Alan Coleman says that on average 43 per cent of the revenue of the ecommerce companies who took part in their study is generated internationally. Photograph: Dave Keegan

The statistic that as much as 75 per cent of the money that people in Ireland spend online goes to overseas companies has been “doing the rounds” for some time now, notes Alan Coleman of Wolfgang Digital. But what about the opposite figure? How do Irish ecommerce companies fare internationally?

According to the digital agency’s ecommerce study for the first quarter, an average of 43 per cent of revenue from participating sites comes from outside Ireland.

Admittedly, the figure is skewed by the travel industry which, as might be expected, sees 72 per cent of its revenue generated internationally.

Experience counts: Coleman says the high performers in Wolfgang’s sample – which have a combined revenue of more than €80 million – tended to have been trading internationally for more than three years.

They typically had one or two major export markets generating the bulk of the revenue, then a long tail of 40-plus markets delivering dribs and drabs.

Most of the high-performing sites had not translated their websites for other markets, but were making sales in multiple countries where English is not the first language.

But it doesn’t happen by chance. Search, and in particular paid search advertising, was the most important source of traffic and revenue in export markets for both new entrants and those with a long-established presence.

This is the flipside of the “75 per cent of money spent online goes abroad” figure, Coleman says. Customers in far bigger export markets are ready to spend money with Irish businesses bold enough to enter them.

The “Irish problem” – operating in a tiny domestic market – is one that has never been easier to surmount.