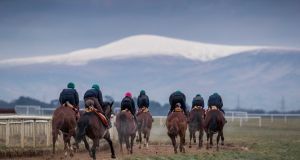 HRI largely attributed the sharp decline in tote turnover to a ban on betting on horse racing introduced by the Israeli government in August 2018. Photograph: Inpho

Horse Racing Ireland cut its annual deficit by 24 per cent last year, despite experiencing a sharp reduction in turnover on tote betting.

Accounts for the governing body of the horseracing industry in Ireland show it recorded a slight reduction in overall levels of annual income and expenditure in 2018, as it reported an annual deficit of €3.45 million, down from €4.6 million in 2017.

The figures illustrate HRI’s ongoing reliance on financing from the Government’s Horse and Greyhound Racing Fund, which was unchanged last year at €64 million.

This accounted for the bulk of HRI’s net income which fell 0.6 per cent to €100.6 million.

Income from racing activities including the tote contributed €1.6 million – down from €3.1 million in 2017.

The accounts show betting turnover at Tote Ireland, a wholly-owned subsidiary of HRI, fell by 34 per cent last year to €65.2 million, down from €99.1 million in 2017.

HRI largely attributed the sharp decline in tote turnover to a ban on betting on horse racing introduced by the Israeli government in August 2018. The ban came just five years after a deal was secured in Israel to allow Irish and British racing to be shown in betting shops.

HRI said it had undertaken a strategic review of Tote Ireland due to the significant decline in turnover from its subsidiary which has resulted in the reorganisation of tote operations last year.

HRI’s contribution to prize money rose by 4 per cent to €42.8 million, although overall expenditure fell 0.4 per cent to €103.6 million last year due to lower spending on capital projects.

HRI chairman Nicholas Hartery was cautious about its future financial situation, saying Brexit had a potentially serious impact across the organisation and the wider horse-racing industry.

Mr Hartery said concerns included but were not limited to the impact of the sterling-euro exchange rate and the movement of horses.

“Horse Racing Ireland is actively involved in ensuring that the implications for the industry are communicated to the relevant officials,” Mr Hartery said.

The accounts show the total remuneration package of HRI chief executive, Brian Kavanagh, was unchanged at €247,000 in 2018.