High Court told of ‘culture of deference’ towards Denis O’Brien 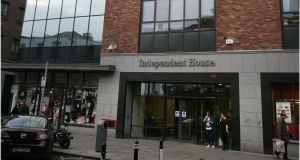 High Court was told of concerns over issues at INM.

The State’s corporate watchdog is concerned several serious matters suggest a “fundamental malaise” within Independent News & Media and a “culture of deference” to its major shareholder, Denis O’Brien, the president of the High Court has heard.

The board of INM, a publicly listed company, has said, albeit “qualified”, that, if the various claims are true, it was “intentionally misled” by its former chairman Leslie Buckley, a nominee of Mr O’Brien’s, Brian Murray SC, for the Director of Corporate Enforcement (ODCE), said.

The fact the board appeared to have been effectively lied to and “hoodwinked” by Mr Buckley is of the “greatest public importance”, the court was told.

That raised issues concerning “what other ways” the board “might have been hoodwinked”, how Mr Buckley could have been placed in a position of such “untrammelled authority and influence” within INM and why the Board “did not know what he was doing”.

While the court does not have to decide the truth or otherwise of matters including an alleged data breach at INM over a period from October, 2014, the subsequent alleged interrogation of confidential data and proposed payments to companies linked to Mr O’Brien, there is adequate evidence to justify the appointment of inspectors to investigate those matters, he said.

The board of INM was “very willing indeed” to accept Mr Buckley’s explanation for those matters as a cost cutting exercise when the strong circumstantial evidence seemed to prefer the conflicting account of its former CEO Robert Pitt, including Mr Pitt’s claims the data interrogation was paid for by company linked to Mr O’Brien, he said.

Mr Buckley had said the data was accessed as part of a cost saving exercise initiated by him arising from his concerns about the cost of a €650,000 annual legal services contract for Simon McAleese solicitors, the court heard.

In reply to Mr Justice Peter Kelly, Mr Murray said it did not appear Mr McAleese was contacted in the context of the cost reduction exercise.

Counsel said it was also not clear how the names of some 19 people whose data appeared to have been interrogated, including journalists, former INM employees and two senior counsel to the Moriarty tribunal, were linked to that exercise.

Those persons may have been in some way regarded as having acted adversely to the interests of the former shareholder, he said.

It was also clear there were other analyses of the data which the ODCE has been unable to access, he said.

There were also allegations that Mr Buckley apparently gave Mr O’Brien confidential and price sensitive information, Mr Murray said. The court did not have to decide the truth of those or otherwise of the various allegations, just whether there was sufficient weight to them to merit appointment of inspectors to INM.

These and other circumstances present an “unusually strong case” for appointment of inspectors suggest a sequence of “critical failures” in the management and operation of a public company that performs important public functions in the State, counsel said.

It was of concern that INM referred to the matters raised as a small number of historic events and individual and isolated incidents, he said.

If the events are as alleged they are not isolated but rather “bound by three common features” – the chairman Mr Buckley, the major shareholder Mr O’Brien and an act or proposed act intended to confer an advantage on Mr O’Brien at the expense of the company as a whole, he said.

If what the ODCE was concerned did occur had occurred, that could only have happened because of a fundamental malaise within the company and a culture of deference to the major shareholder and his nominee. The suggestions that a 29 per cent shareholder could even try and achieve the objectives suggested by the alleged events was of the “greatest moment”.

If true, it meant INM had hosted a pattern of very serious wrongdoing and attempted wrongdoing at the expense of other persons.

A suspicion that certain events were controlled by the major shareholder, who also controls other media in the State, is of the greatest importance, he added.

Counsel was opening the application by the ODCE for appointment of two inspectors to investigate the conduct of INM’s affairs.

The application follows a year long investigation by the ODCE into issues raised in protected disclosures made in 2016 and 2017 by former INM CEO Robert Pitt and INM chief financial officer Ryan Preston.

The disclosures included about an alleged date breach during which INM data was exported from the jurisdiction over a period of months from October 2014 and “interrogated” by third parties in an exercise allegedly authorised by Mr Buckley and paid for by a company of Mr O’Brien’s.

The ODCE has said it is concerned INM’s affairs are, or have been, conducted in a manner unfairly prejudicial to some part of its members and says he is relying on “multiple instances” demonstrating the influence of the major shareholder in the day to day affairs of INM.

INM opposes inspectors, arguing there is no evidence of wrongdoing. It says that a damages case by it against Mr Buckley, various measures taken by its Board and the continuing investigation by the Data Protection Commissioner into the alleged data breach at INM all address the ODCE’s concerns.

The hearing is continuing.