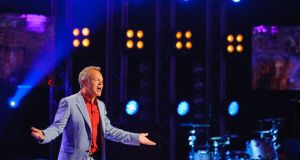 The popular BBC presenter is laughing all the way to the bank as the £2.33m he received in presenter fees, production fees along with royalties follows on from the £2.6m he earned in 2012.

That same year, Norton shared £10 million up front with his business partner, Graham Stuart from the sale of their So Television company to ITV.

The pay-out to Norton confirms that the 51-year-old clocks up over €1,700 in fees and royalties for every minute he is presenting his top-rated Graham Norton show that continues to attract Hollywood A-listers on BBC1 every Friday night.

In the current series alone, Norton has interviewed Russell Crowe, Cameron Diaz, Kylie Minogue and our own Michael Fassbender and Imelda May.

The fees received by Norton last year dwarfs the fees paid to RTE’s top earners with the most recent figures showing that Ryan Tubridy is the best paid taking in €495,000 per annum.

The Graham Norton Show is the main earner for So Television Ltd and new figures just lodged with Companies House show that pre-tax profits at the firm declined by 22 per cent in 2013 from £2.34 million to £1.8 million in the 12 months to the end of July 31st.

The Graham Norton Show is shown throughout the world with TV3 securing the Irish rights and in the year under review, Norton presented 32 episodes of the series.

Norton’s New Year’s Eve Show enjoyed an audience high with 4.7 million viewers tuning in to see him interview the cast of Monty Python and Anchorman 2.

In the deal with ITV on the sale of So Television, ITV agreed to pay £10m up front while a further £7 million will be payable depending on its performance up to July 2016.

Born in Dublin and raised in Bandon, Co Cork, Norton first shot to prominence in 1996 for his part of Father Noel Furlong in ‘Father Ted’ before he moved to Channel 4 to host his own chat show.

Last May, the Graham Norton Show won the Best Entertainment Programme BAFTA award and Norton has been nominated for two BAFTAs this year including best entertainment performance.

Numbers employed by the firm increased by two to 26 last year though staff costs last year decreased from £1 million to £885,696.

Remuneration to the firm’s five directors that includes Norton and Stuart last year dipped from £440,642 to £412,000 - with the unnamed highest earning director receiving £250,000 in fees.

The firm’s other shows include the Sarah Millican Show and the Alan Davies Apres Ski that was run throughout the recent Winter Olympics.

According to the directors’ report for the firm, they state that the sales were down 12 per cent at the firm last year “due to one new American series not being recommissioned in 2013”.

The report adds: “However, ‘The Graham Norton Show’ and other series continues to perform well and did return in 2013.”

The report states that the firm produced 48 hours of programming in 2013 compared to 70 hours delivered in 2012.

The directors’ report adds that “strength of development, investment in development including So Comedy Live for future growth remains strong”.

The firm also recorded 4 per cent growth in international distribution income increasing from £2.758 million to £2.903 million.

The directors state that they expect the company to continue to grow through the development of productions for broadcasters.

Accumulated profits at the group last July totalled £5.1 million and the firm had cash totalling £6.79 million.

The accounts show that firm’s cost of sales last year decreased from £9.7 million to £8.6 million with the firm’s gross profit decreasing from £3.88 million to £3.32 million.

Administrative expenses marginally decreased from £1.547 million to £1.514 million resulted in an operating profit of £1.8 million.