But display ad revenues will soon migrate in its direction, says Wolfgang Digital 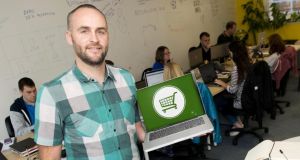 The old marketing adage “I know half my advertising budget is wasted, I just don’t know which half” is attributed to US department store owner John Wanamaker.

He died in 1922, and Alan Coleman, chief executive of marketing company Wolfgang Digital, is among those who believes the quote should be regarded as a 20th-century problem.

In 2014, advertising without dependable key performance indicators (KPIs) is “simply no longer acceptable,” he says. But how can you tell if the KPIs for your site are good, bad or mediocre?

In a study analysing 56 million visits to websites in the Irish retail and travel sectors and some €214 million in revenue spent as a result, Wolfgang has sought to put common e-commerce KPIs in context.

“Win on Google, win online,” is one of its main findings. On average, 70 per cent of website traffic and 70 per cent of the e-commerce revenue comes from Google, both organically and through paid search ads.

Only 1.4 per cent of the e-commerce site traffic and just 1 per cent of revenue comes via Facebook referrals.

Clicks on online display advertising led to less than 1 per cent of traffic on e-commerce sites, despite industry estimates that about a third of digital marketing budgets are spent on display ads.

“Online only” retailers, meanwhile, have significantly higher rates of converting visitors into sales than the average conversion rate for their sector, which is 1.35 per cent. Travel sites had a sales conversion rate of 1.56 per cent.

Coleman expects Facebook to become a more important source of traffic. “Facebook has revolutionised its advertising platform and, while it will never compete with Google for conversion, it can provide similar levels of traffic at a very competitive cost,” he says. “I predict display budgets will migrate to Facebook en masse.”