Independent News & Media will reduce its interest in the Australasian company 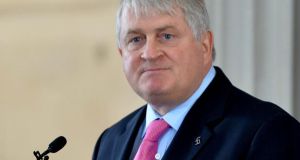 Denis O’Brien: committed to take up his rights issue entitlement in full


Denis O’Brien will increase his stake in Australasian group APN News and Media to 12.2 per cent following the company’s proposed issue of new shares.

Independent News & Media (INM) will not be participating in the equity issue and will see its stake in the firm fall from 28.95 per cent to 18.6 per cent.


Equity issue
APN said the launch of a 132 million Australian dollar equity issue would finance the acquisition of the remaining 50 per cent of its Australian and New Zealand radio assets from US group Clear Channel.

However, INM said that “having recently concluded a substantial restructuring and strengthening of its balance sheet”, including its own equity issue, it would not partake.

“INM’s priority objective at this time is to retain the operational flexibility necessary to reposition its operations for an improvement in Ireland’s evolving media market,” it said in a statement to the stock exchange.

Mr O’Brien, who is the largest shareholder in INM with a 29.9 per cent stake, will increase his direct holding in APN to 12.2 per cent via the investment vehicle Baycliffe Ltd after committing to take up his rights issue entitlement in full. Baycliffe currently has a direct holding of 1.89 per cent in APN.

INM added that it was “fully supportive” of APN’s strategy and remains “fully committed” to retaining its stake in the enlarged group.

“Full participation by INM would have been challenging,” wrote Davy Research media analyst Simon McGrotty in a note to investors. INM “does not have the balance sheet” to finance its share of the capital raising, which would have cost it more than €20 million, and would have had to go back to its shareholders once more to raise new equity. “This would have been a step too far,” Mr McGrotty noted.


‘Earnings growth’
“These are APN’s best results in a number of years,” said the group’s chief executive Michael Miller. He said the performance reflected “strong earnings growth” in its radio businesses as they increased market share, as well as a record result for the outdoor advertising business Adshel, in which it holds a 50 per cent interest, and ahead-of-target cost savings in its publishing operations in the second half of the year.

It has sold some of its businesses, e-commerce business brands Exclusive and its New Zealand magazine titles.

Radio is the best performing medium for the group, with its Australian radio assets outperforming the market with revenue growth of 6 per cent. “Our goal is for [the division] to be the number one FM network in Australia, ” the company said.

1 In six months we will be in the grip of a 1980s-style recession
2 Angela Merkel sweeps in to save the euro zone
3 Aer Lingus wants quarantine period axed to resume flights in July
4 Google facing $5bn lawsuit for tracking in ‘private’ mode
5 Deloitte expands into cloud computing with deal for DNM
6 More than 2m people use website that shows lockdown distance limits
7 Unemployment rate remains at near record 26.1% in May
8 Should my mam wait for house prices to drop before buying?
9 Pinterest seeks new office for Dublin EMEA headquarters expansion
10 Apple tax case: Four individual lawyers paid over €500,000 each
Real news has value SUBSCRIBE

Stock market rally holds as investors cling to recovery hopes 12:03
Unemployment rate remains at near record 26.1% in May 11:52
Bank of England tells banks to get ready for no-deal Brexit 11:11
More than 2m people use website that shows lockdown distance limits 10:35
Angela Merkel sweeps in to save the euro zone 10:32
Search executive
jobs on irishtimes.com