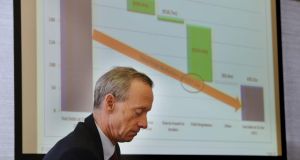 “Obviously recruiting a new CEO is part of the agenda for 2014,” said Vincent Crowley, chief executive of Independent News & Media (INM), or its outgoing chief executive to be precise. “So that’s it,” he said, wrapping up the presentation of his swansong, INM’s 2013 financial results.

And that was it – almost. Late last month, INM confirmed Crowley’s exit, after two years in the top job and a total of 24 years at the group, and it fell to the man himself to update journalists on the process yesterday. “The search for a replacement for me is under way,” he noted. “Well under way”, in fact.

INM chairman Leslie Buckley, a business associate of the company’s largest shareholder, Denis O’Brien, is expected to announce a successor to Crowley by the end of May at the latest.


More changes
The press briefing was also the last for public relations agency Murray Consultants, which has been replaced in the company’s affections by Heneghan PR.

Despite these changes, INM’s corporate melodrama has long passed its high noon. Last year was a burden-lightening year for the group, after some €142 million in debt forgiveness from its banks and €134 million in proceeds from the sale of its South African business helped it slash its net debt below €100 million.

The for-sale sign is now up on its loss-making education businesses, but these are not expected to yield big proceeds, the disposal being more about “regularising” the remaining INM assets.

There was still time for some new jargon. INM now operates an “audience-first newsroom”, he said, and would use “enhanced customer data to deliver more targeted solutions for advertisers”.


‘Verticals’
Its digital team will be launching new content “verticals” and studying closely how users interact with its editorial offering.

“Do they just flit around, or do they engage with business, sport, or Independent Woman?” pondered Crowley, who had just finished recording his own video interview for the company website.

Print, however, was getting a bad press, he believed. “We collectively need to be much more positive about print, because we still deliver huge audiences, week in, week out.”

Being print-positive doesn’t mean being “in denial” about how people consume their news, he added.

Perhaps, given his bullishness on ink and newsprint – and given he doesn’t intend to retire just yet – another newspaper industry role might lie in Crowley’s immediate future?