Does what you eat ooze filth and guilt, or bathe in a pure and holy light? 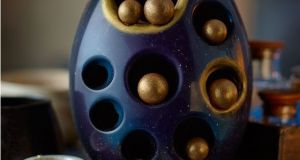 Giant Cosmic Egg: Artisan luxuries such as these have always surfaced at roughly this time of year. The difference, now, is that consumers don’t have to hunt them down in specialist enclaves

In the age of extreme food, chocolate has lost the run of itself.

Take the Giant Cosmic Egg, made for Marks & Spencer by Earth’s own Lir Chocolates. This “gleaming blue” Blake’s 7 of Easter eggs, a sequel to 2015’s Giant Golden Lattice Egg, is “scattered with stardust” and hand-finished “with smudges of gold shimmer and golden spheres filled with molten dulce de leche”. Each egg has “its very own personal galaxy painted across it”.

Artisan luxuries such as these have always surfaced at roughly this time of year. The difference, now, is that consumers don’t have to hunt them down in specialist enclaves. They are stocked on supermarket shelves once reserved for eggs you could shatter with one poke of your little finger.

If sugar is the devil, then outsized chocolate pods like these should be treated as the spawn of a hostile alien, here to trigger levels of adult greed we’re not supposed to possess. Instead, they somehow manage to manifest as works of culinary art that only a connoisseur would have the good taste and the required €60 to put in their basket.

For every food trend, there is a counter-trend. This year’s Pancake Tuesday, for example, saw a worrying congregation of well-meaning people foisting “healthy” pancake recipes upon the nation (flour, milk and eggs being unacceptably déclassé). Eventually, after a million life-sapping recipes for spelt wholegrain almond milk pancakes shrouded in blueberries, pictures began to circulate of their nemesis: an insanely high stack of fat pancake discs dripping with chocolate sauce and the gooey entrails of a Cadbury Creme Egg, its unsurprising source being the Cadbury social-media team.

Reports from industry trackers Nielsen suggest global sales of both healthy and indulgent foods are swelling, while the “semi-healthy” category is under pressure. Britain’s annual national food surveys confirm people now eat less toast than they used to . . . but more pizza.

This same boom-or-bust food culture was summed up by Australian site Good Food as “burgers v kale smoothies” – an environment in which both the “gourmet” meat-cheese-bun chains and the green sludge army are coining it.

The “sugar is poison” preachers spread their gospel in a decade in which retail space has been colonised by ye olde sweet shoppes and where the likes of Hotel Chocolat (home of the “Ostrich” egg) can plan a £150 million stock market listing.

Future generations may look back at the career of Maria Sharapova and go wide-eyed not at her drug habit, but her endorsement of kidult “premium candy line” Sugarpova (whose still-active Instagram account attracts pithy comments such as “try the new meldonium flavour guys!!” from users).

But for now, rainbow-coloured jellies and other varieties of crack cocaine continue to decorate social media. The ordinary and bland does not play well on Instagram. Food needs to either ooze filth and guilt, or bathe in a pure and holy light.

It’s an arms race of food marketing and it is helpfully carried out on the industry’s behalf by earnest lifestyle bloggers on one side and gleeful unrepentants on the other. How clean or how dirty can you go?

To be fair, the ironically surnamed Bacon wasn’t trying to win some kind of contest, but to promote her business, Moon Juice, which implores humans to “thrive cosmically” in a hilarious online “lunar apothecary” of jars labelled Spirit Dust, Good Night Dust, Sex Dust and Cry for Help Dust – no, sorry, not that last one. She doesn’t stock Cosmic Eggs either.

As for the rampant attention-seeking on the indulgence end of the spectrum, I fear we are still hundreds of smashed Creme Eggs away from peak decadence. Ask any food marketer: that Guinness Book of World Records won’t write itself.