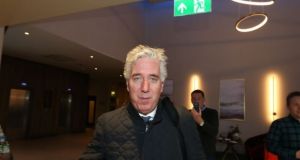 The Republic is “in denial” over the threat Brexit poses to Irish stock trade, according to a report in the Sunday Times Ireland edition. It quotes Stephanie Bouhjnah, chief executive of Euronext, the owner of the Irish Stock Exchange, who said Irish authorities should urgently consider shifting shares settlement away from London to Brussels.

Elsewhere, the same publication says that entrepreneur Enda O’Coineen is weighing up a flotation for his media interests on the Nasdaq First North stock exchange in Stockholm. Mr O’Coineen’s Kilcullen Kapital (sic) Partners, which owns the Sunday Business Post, is reportedly considering an IPO early next year with Dublin advisory firm Fola, advising on the possible float.

Dublin stockbroker Campbell O’Connor, which is closing its door in June, is the subject of a Central Bank enforcement procedure that has yet to be completed, the Sunday Times reports. The closure of the firm is not directly related to the procedure. However, Campbell O’Connor did cite “the ever increasing complexity of doing business in a changing regulatory landscape which does not favour smaller firms” as the reason for it ceasing operations.

The same newspaper reports that property group Kennedy Wilson is looking at building 268 more rental apartments at the Grange development in Stillorgan. The company already has 274 completed apartments and development land at the same site. The move comes amid a debate about the large number of build-to-rent properties coming on-stream in Dublin.

On a related theme, the Sunday Independent reports that funds buying residential properties in blocks are to reach a record high this year after €430 million worth of homes were secured by investors in the first quarter. According to figures from Hooke and MacDonald, 280 units have been sold in blocks in deals worth €88 million in Dublin with a further 775 units sale agreed.

The Sunday Independent also writes that Philip Lane’s departure from the Central Bank could have repercussions for lenders with a suggestion that banks may soon be forced to charge more for mortgages. Mr Lane recently spoke on the need for the introduction of a systematic risk buffer that would force banks to hold more capital, a move that would likely increase the cost of lending.

The same publication reveals that Irish company UFODrive is to roll-out a small number of Tesla Model S electric cars to hire in Dublin. The start-up is also rolling out electric cars from other car manufacturers including Jaguar, Nissan, Audi and Hyundai.

Thousands of businesses face higher water charges, according to the Sunday Business Post. It warns that revised tariffs being considered by Irish Water could lead to a big jump in costs for companies with up to 67,000 businesses facing additional charges of up to €250 a year.

The Business Post also reports that Dublin-listed Mainstay Medical is looking to raise €9 million as it looks to submit applications to have its treatment for chronic back pain approved by regulators in the US. The company lost $31 million last year and expects to continue to lose money in 2019 due to heavy spending to secure commercial approval for its ReActiv8 treatment.

Accountancy firm Deloitte has earned more than €1 million in audit fees from the Football Association of Ireland (FAI) since 1997, the Post reveals. Deloitte, which each year has reported that the FAI’s financial statements give a “true and fair view” of the position of the FAI, had cause to report a H4 form to the Companies Registration Office last week alerting it that proper accounting records were not kept by the association.

1 Who are Ireland’s 17 billionaires?
2 State subsidises public sector retirees to cover gap until State pension
3 My father in a nursing home wants to gift me his house
4 Richer countries must do more to tackle climate change, Thunberg tells Davos
5 Health insurance: Switch often for your financial wellbeing
6 Nama lends Cosgraves €15m to fund huge apartment development
7 Builders completed 21,500 homes in State during 2019
8 Are there annual limits on inheritances or gifts to a child?
9 Irish whiskey sales slow in US but distillery visitors top 1m locally
10 Cubic Telecom raises more than €11 million in funding
Real news has value SUBSCRIBE