Bank of Ireland to sponsor Irish Open in three-year deal 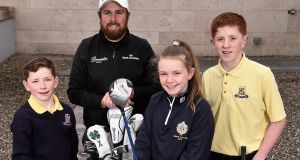 Bank of Ireland has announced a three-year sponsorship deal with the Irish Open golf tournament. The Dubai Duty-Free Irish Open hosted by the Rory Foundation, a charitable foundation set up by Rory McIlroy, has added the bank to its list of official sponsors ahead of the 2016 tournament, which takes place at the K Club from May 19th to 22nd.

Some 100,000 people are expected to attend the Kildare venue over the course of the four-day tournament, with TV coverage in Ireland being shared between RTÉ and Sky.

As part of the sponsorship, Bank of Ireland is running a competition for golf clubs where the prize is to have the club branding displayed on the golfing attire of Shane Lowry on the Thursday and Friday of the competition.

The bank will also support the Irish Open Golf Skills Challenge for under-15s, run by the European Tour in conjunction with the Confederation of Golf in Ireland.

The competition, which is open to all clubs, aims to help develop young golfers in their putting, chipping, iron play and driving skills. Two winning teams will be given the opportunity to attend the pro-am in Kildare on May 18th.

Bank of Ireland’s chief executive of corporate banking Tom Hayes said the bank was “proud to be associated with an event that has developed into one of the most popular tournaments on the European Tour”.

1 We are ‘sale agreed’, but can we go back with a lower offer?
2 Working from home: New costs, new stresses and little relief
3 Eason to lay off 150 staff as it prepares for June reopening
4 Joint accounts: if one of us dies, can the other access the money?
5 HSBC board rethinks overhaul and seeks even deeper cuts
6 ESB shelves plan for €500m electricity generator at Poolbeg
7 Restaurants and gastropubs hope to avoid a dry reopening
8 Ryanair almost certain to oppose German government’s bailout of Lufthansa
9 Covid-19 has turned the volume up on musicians’ cut from streaming
10 ‘Over 1,000’ pubs have interest in Covid-19 insurance test case
Real news has value SUBSCRIBE