Al-Jazeera America to cease broadcasting by end of April 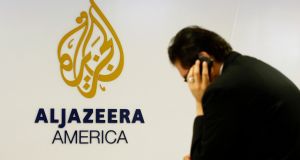 Channel says decision to close was driven by “the fact that our business model is simply not sustainable in light of the economic challenges in the US media marketplace”. Photograph: REUTERS.

Cable news channel Al-Jazeera America, which debuted in 2013 to great fanfare when it promised to cover US news soberly and seriously, will be shutting down by the end of April.

The move was announced at a companywide meeting on Wednesday.

At the companywide meeting, Al-Jazeera America staff members, some in tears, were told that the decision to shut the network had not been unanimous.

But in the end, the decision was an economic one. The channel, it was felt, had fallen victim to the lack of a business model beyond continuous support from Qatar, the energy-rich country that owns it.

Some staff members saw that as a tacit admission that falling oil prices were behind the closure, although a spokeswoman for the company denied that Wednesday.

Anstey said that once the cable news network shuts down by April 30, Al-Jazeera would expand its digital presence in the United States.

The expansion “would bring new global content into America.” Al-Jazeera America went on the air in August 2013 after buying Al Gore’s Current TV for $500 million.

It promised to be thoughtful and smart, free of the shouting arguments that have defined cable news in the United States over the past decade.

And Al-Jazeera America has not been free of controversy in recent months. In November, the news station’s general counsel, David W Harleston, was suspended following a report in The New York Times that he did not appear to be licensed to practice law.

In December Al-Jazeera America aired an hour long documentary that linked some of the biggest stars in Major League Baseball and the National Football League to performance-enhancing drugs.

The most prominent athlete mentioned was Denver Broncos quarterback Peyton Manning, who angrily denied the report. Baseball players Ryan Howard and Ryan Zimmerman have filed defamation suits against the network.

When told on Wednesday of Al-Jazeera America’s plans to shut down, Manning deadpanned, “I’m sure it’s going to be just devastating to all their viewers.”