Film about War of Independence cost less than €100,000 to make 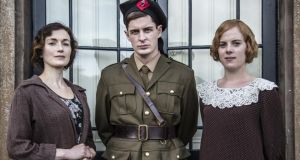 ‘A Nightingale Falling’: a film set during the War of Independence, featuring Tara Breathnach, Gerard McCarthy and Muireann Bird.

A Nightingale Falling, a new movie about the Irish War of Independence co-financed by veteran aviation businessman Gerry Burke, has signed up 7&7 in London as its sales agents.

The movie, which launches in eight Irish cinemas this weekend cost just under €100,000 to make with funding from Burke and production company Mixed Bag Media.

Mr Burke, who began his career with the Air Corps, later worked with GPA, before becoming a senior executive with the Magellan Aviation Group.

The Shannon and North Carolina based company is a supplier of airline parts and a specialist in engine leasing and trading. Its Irish company recorded a profit of $6 million (€4.6m) on turnover of $52 million in the financial year to the end of 2013.

“We met Gerry when we were making a documentary on canal barges [called a Grand Experience],” Garret Daly, managing director of MBM said. “He owns a barge and appeared in the documentary.”

Mr Daly said he had been trying to get funding to make a movie of A Nightingale Falling, a book set during the Irish War of Independence from 1919 to 1921 by PJ Curtis, but to no avail.

“He loved the story and enjoyed working with us on the documentary,” Mr Daly said.

IMC Cinemas has agreed to show the film in Ireland along with a number of independent venues. “We believe we can get a return on our investment,” Mr Daly said. “7&7 has agreed to be our sales agent. There is huge demand for good period dramas both as video on demand as well as on television.”

Industry veterans Maura and Antony Ford set up 7&7 as a boutique movie distributor in 2010. Maura Ford also works Inception Media Group which sells content directly to US based digital retailers such as iTunes, Netflix and Amazon.