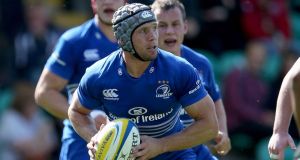 Leinster’s Isaac Boss in action in a preseason game against Northampton. Bank of Ireland’s current deal with Leinster was due to expire at the end of this coming season. Photograph: Dan Sheridan/Inpho

Bank of Ireland has renewed its sponsorship with Leinster Rugby for the next five years in a deal believed to be worth close to €6 million.

The breadth of the sponsorship has been increased dramatically, with nearly €1 million to be provided over the five years to promote the amateur game across the province.

This will cover all grades, from under-eights mini-rugby to senior adult competitions and the women’s game. It will also result in the bank sponsoring the Leinster senior and junior schools cups when their existing deals expire.

This element of the sponsorship also includes support for development officers, coaching materials, equipment and the coach development programme across the province.

Details of the sponsorship will be announced this morning.

The bank’s current deal with Leinster was due to expire at the end of this coming season, and it had until October to renew its deal before it went to the market. The sponsorship will now run until June 2019.

Mark Cunningham, director of business banking at Bank of Ireland, told The Irish Times that this renewal was a “great opportunity to connect with the Leinster rugby base”.

The new deal comes as Leinster faces increased pressure to continue operating near the top of European rugby, due to the financial power that French and English clubs have gained in the past couple of years, through lucrative domestic television deals and the substantial backing provided to certain clubs by wealthy individuals.