2fm had ‘to be destroyed’ in order to rebuild it 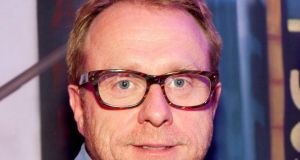 “I’m 51, I have a one-year-old, I have no pension, so this better work,” Dan Healy, head of 2FM on his efforts to revitalise the radio station at today’s Radiodays Europe conference in Dublin.

Radio stations have to be destroyed before they can be rebuilt, the head of 2fm, Dan Healy, has told the Radiodays Europe conference in Dublin.

Mr Healy, who is overseeing a radical overhaul of the loss-making RTÉ music station, said he had embarked on an eight-month process of “destroying” the underperforming 2fm in order to regain listeners lost following the death of Gerry Ryan.

“I believe you have to destroy a radio station in order to rebuild it and that’s what it’s about,” he said at the Convention Centre Dublin event, which is being attended by more than 1,300 representatives of the radio industry from across the world.

Introducing himself as “Ireland’s biggest idiot”, in reference to one of the milder listener criticisms he has received, Mr Healy said 2fm had to “recover our territory, not just from other stations, but from people who aren’t listening to radio at the moment”.

2fm’s national audience share has plummeted from the 12 per cent it commanded four years ago, before the death Mr Ryan in April 2010, to 7.6 per cent in the latest Joint National Listenership Survey - although this was up from 7.2 per cent in the previous set of figures.

“We have a big hole to fill,” he said, in relation to Mr Ryan.

Mr Healy, a veteran of Ireland’s commercial radio sector, began his reign last summer by ordering presenters not to play any music recorded before 1990. He has since introduced a new breakfast show, Breakfast Republic, to replace Breakfast with Hector, added former Westlife singer Nicky Byrne and co-host Jenny Greene to a late morning slot and moved Colm Hayes to 2fm Drivetime, where he has replaced the Limerick-based Will Leahy.

Long-term DJs Dave Fanning and Larry Gogan were moved to weekends, while Louise McSharry, previously the station’s weekend breakfast presenter, took over the weekday 8pm slot, where she is followed by Chris Greene and Ciara King, who Mr Healy hired from regional station iRadio.

The 2fm boss said he had been “astonished” by the amount of media attention the schedule changes had received. “I’ve never experienced anything like it,” he said. “I’m 51, I have a one-year-old, I have no pension, so this better work,” he added.

Meanwhile, Liam Thompson, the outgoing group programme director for Communicorp, which counts Today FM, Newstalk and Spin 103.8 among its Irish radio holdings, said the decline in Ireland’s 15-34-year-old population was a cause for concern. “If you’re not recruiting listeners into radio, then all of our radio stations have a long-term problem.”

However, BBC director of radio Helen Boaden, who is due to give the keynote address to the conference, warned that changes in listenership habits, driven by technology, were happening across age groups. “I think it is really dangerous if we just see this as being about the young.”

Opening the conference, RTÉ director-general Noel Curran said the younger generation of listeners were “more broadcaster-promiscuous, less loyal and more platform-neutral” when it came to consuming radio, but that strong listenership figures across the country had “proven the prophets of doom wrong”.

John Purcell, chairman of the Independent Broadcasters of Ireland (IBI) group, said the radio industry had moved beyond the paternalistic view of broadcasting advocated by Lord Reith, the architect of the BBC, in which radio was “the preserve of the few”.