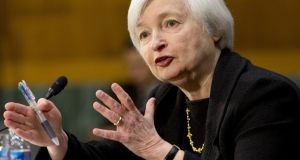 In the ongoing “will they, won’t they” saga, the next key marker is Fed chair Janet Yellen’s speech this Friday at the gathering of world central bankers in Jackson Hole in Wyoming. Photograph: Jacquelyn Martin/AP

It is not an easy job being chair of the US Federal Reserve Board in one of the most unusual periods in recent monetary history. In any “normal” economic recovery, US interest rates would be much, much higher.

But in the current cycle the Fed has only felt able to raise rates once from their historic crisis lows of close to 0 per cent. The current guide for the Federal funds rate is 0.25 to 0.5 per cent and it is a comment in itself on the mood in world markets that there is now such debate on when the Fed might raise this to the (un)giddy heights 0.5 to 0.75 per cent.

The reason why is, of course, well rehearsed. Growth has been lacklustre and the rate of inflation has remained low. It is probably no coincidence that world financial markets went through a rocky patch after the Fed raised rates for the first time since 2006 last December, even if other factors – notably fears about China – were also then in play.

Now, in the ongoing “will they, won’t they” saga, the next key marker is Fed chair Janet Yellen’s speech this Friday at the gathering of world central bankers in Jackson Hole in Wyoming. At the moment the markets, on balance, do not expect the Fed to move again until early next year.

However, a weekend speech by Fed vice-president Stanley Fischer – saying that the Fed was not far off meetings its inflation and employment targets – did give analysts pause for thought. A few pieces of strong economic data could swing the mood quickly, with September providing the next opportunity for a rate hike.

The Fed is caught in a bind. It wants to try to move back to some kind of normal interest rate policy. But it knows that moving too quickly could lead to market mayhem. If Yellen wants to signal the possibility of an Autumn move, then she needs to do so this Friday.

The betting is that she will leave enough wriggle room in whatever she ways to allow the Fed to jump either way. Sooner or later, however, the call will have to be made.