Wild week for markets ends on a quiet note

European shares ease back after 8% drop, as fears of slowdown triggered price swings 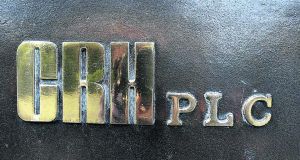 European shares eased back yesterday, having already recouped nearly all their losses from a bruising 8 per cent drop earlier this week, with markets cooling off despite hopes of more help from central banks.

The pan-European FTSEurofirst 300 index slipped 0.3 per cent. The index was broadly flat on the week but still down nearly 10 per cent in August and at risk of its worst monthly loss in four years.

The euro zone’s blue-chip Euro STOXX 50 index fell 0.4 per cent while Germany’s Dax weakened 0.8 per cent, with the Dax nearly 20 per cent below a record high in April.

Fears of a slowdown in global economic growth, which intensified after China devalued its currency this month, triggered big price swings across equities, currencies and commodities this week.

DUBLIN The Iseq ended the day down 0.3 per cent at 6,309 in line with other European bourses.

Ryanair capped a rollercoaster week with a 2 per cent slide to close at €12.17 while rival Aer Lingus fell 1 per cent to €2.48.

FBD enjoyed a relatively quiet session in comparison to recent days falling just 0.1 per cent to close at €5.84. The insurer’s market value has fallen by 50 per cent in the past 12 months after it twice cut its earnings forecasts and reported a worse-than-expected loss.

Bookmaker Paddy Power, which this week announced plans for a merger with rival Betfair, remained flat at €97.36.

LONDON Britain’s top share index posted its biggest monthly drop in August since 2012 after fears over China’s growth hit global markets, although it managed to recoup more losses yesterday following a volatile start to the week.

The FTSE 100 was 55.91 points, or 0.9 per cent, higher on the day at 6,247.94 after a week when it both dropped to multi-year lows and staged its biggest one-day gain in years. The index fell 6.7 per cent this month, its worst performance since May 2012, after China’s surprise devaluation of its currency spooked markets. The declines have erased gains made in the first quarter and left the index in a loss for the year.

The index’s top gainer was satellite communications company Inmarsat, rising 4.3 per cent after the launch of its third Global Xpress satellite, which will provide mobile broadband service to customers in the remotest regions.

EUROPE European stocks fell, nearing the end of a week that has seen the wildest swings in years. The Stoxx Europe plunged the most since 2008 on Monday. It then recovered all those losses on Thursday, before sliding again. Europe’s benchmark gauge has tumbled 8.9 per cent in August, heading for the worst month since 2011.

Italy’s FTSE MIB index tumbled the most among western- European markets, dragged lower by a 5.3 per cent decline in Salvatore Ferragamo. The luxury shoemaker posted first-half revenue that missed estimates.

NEW YORK US stocks fluctuated, with the Standard and Poor’s 500 Index on track for its worst month since May 2012, as equities continued to swing amid this week’s turbulent trading and shifting investor sentiment.

Pfizer and Johnson & Johnson slumped at least 1.2 per cent to weigh on the healthcare group. Google slid 1.5 per cent.