US stocks surge on hopes the worst of pandemic is over 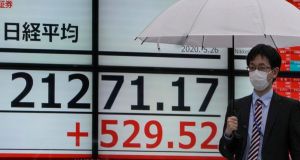 Japan led the equity advance in Asia as the world’s third-largest economy reopened.

US stocks surged to the highest since March 5th as investors speculated the worst of the pandemic’s damage to the global economy has passed after countries moved to ease lockdowns. A dollar gauge fell by the most in almost two months.

The S&P 500 jumped more than 2 per cent following a three-day holiday weekend, propelling it past 3,000 for the first time since early March. Merck and Co rose after it unveiled development plans on both a treatment and vaccine for Covid-19.

The Stoxx Europe 600 Index rallied, with travel stocks surging on reports that Berlin plans to lift travel warnings for 31 European countries. The UK also announced steps toward getting back to business, sending the pound up by the most in almost a month.

Japan led the equity advance in Asia as the world’s third-largest economy reopened, and shares rose in Hong Kong, which showed signs of stabilizing after weekend unrest. Treasuries slid after the three-day US weekend, alongside Germany’s government debt.

Investors are coming out of the holiday weekend in a risk-on mood, even as tensions between Washington and Beijing continue to flare. China condemned the US for adding 33 Chinese entities to a trade blacklist, but without announcing any retaliatory steps.

Meanwhile, Beijing sought to reassure Hong Kong that its judiciary would remain independent under a new national security law.

Cutting against the tensions are mounting signs that coronavirus infection rates are moderating. The Japanese government ended its nationwide state of emergency Monday, while Germany recorded a decline in the number of new virus cases. Signs that more euro area stimulus is on the way is also helping support the appetite for risk.

“The narrative for markets is shifting somewhat, with hopes associated with the easing of lockdown measures in many countries and still very exaggerated hopes of a vaccine being found short-term, needing to be balanced against escalating US/China tensions,” said Marc Ostwald, chief economist and global strategist at ADM Investor Services.

Elsewhere, the euro strengthened ahead of negotiations this week on the form of a bloc-wide recovery fund. WTI crude oil advanced to around $34 a barrel on hopes the market may rebalance after historic output cuts. – Bloomberg