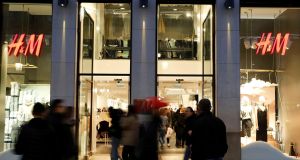 European shares rose on Thursday, after two days of losses, with equities buoyed by good results from companies including insurance heavyweights Munich Re and Generali.

However, Société Générale fell after its deputy chief executive unexpectedly resigned, Swedish fashion retailer H&M declined after weaker-than-expected results and consumer goods giant Unilever lost ground in both its London and Amsterdam stock market listings after it announced that it had picked Rotterdam as its sole headquarters.

The Iseq edged up 0.25 per cent in line with the modest gains across Europe amid thin trading volumes.

Cement-maker CRH, the largest stock on the index, was a solid performer, adding 2 per cent to finish at €28.32. Ryanair rose by 1 per cent, closing at €16.23, on a day when German airline Lufthansa reported strong short-haul demand and said it expected prices would be stable this year.

UK shares managed a meagre gain on Thursday after a three-day losing streak as Britain’s third-biggest company, Unilever, fell after announcing it would make Rotterdam its sole legal home a year before Brexit. The Marmite maker, which said it would keep its London listing despite scrapping its London corporate headquarters, was down 1.7 per cent.

The blue-chip FTSE 100 index was up 0.1 per cent at its close, recovering some losses from the day before thanks to gains in financials, healthcare and industrials. The diplomatic tensions between Britain and Russia have so far had little impact on British shares.

Sentiment around consumer stocks was further dented after shares of mid-cap soap and shampoo maker PZ Cussons dropped more than 16 per cent after the group issued a profit warning, posting its biggest one-day drop on record.

Elsewhere, retail landlord Hammerson posted the worst performance of the FTSE, down nearly 5 per cent after a downgrade from Credit Suisse.

Gains in the insurance sector and strength among tech stocks helped push the pan-European Stoxx 600 index up, accelerating gains in afternoon trading. It ended the day up 0.5 per cent after two days in the red.

Munich Re shares rose 2.8 per cent after the world’s largest reinsurer raised its 2018 profit forecasts and said it planned to buy back €1 billion in shares. Generali also rose 2.5 per cent after it raised its dividend following record operating profit.

SocGen shares slid 2.5 per cent after the French bank said deputy chief executive Didier Valet was leaving following “a divergence of approaches regarding management of a specific legal matter”, understood to be related to investigations over the suspected rigging of the Libor interbank rate.

The Dow Jones Industrial Average added more than 200 points in early trading as industrial stocks gained after the White House trade adviser sought to play down chances of a trade war due to protectionist policies.

The S&P industrial index also rose 0.44 per cent and was on course for its first session of gains in four days, with General Electric, 3M and Caterpillar up more than 1 per cent. Boeing, which investors say may be particularly vulnerable to a trade war, was marginally up. Alibaba jumped 3.2 per cent on reports that the Chinese e-commerce giant was planning a secondary listing in China.