European shares dip ahead of new US sanctions on Russia 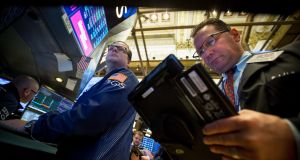 Traders at the New York Stock Exchange on Monday. US stocks rose on Monday, boosted by healthcare stocks and on easing fears that the US-led missile attack on Syria would escalate. Photograph: Michael Nagle/Bloomberg

European shares fell on Monday as investors awaited new US sanctions on Russia, while losses were limited as the market expected there would be no immediate military escalation in Syria following the weekend’s American-led strike. Trading remained cautious as tensions between western powers and Russia persisted and markets braced for new US sanctions on Russia over its continued support of Syrian president Bashar al-Assad.

“Markets react to economic sanctions [in a way that they do not react to air strikes], as specific assets are directly affected,” said UBS chief economist Paul Donovan in a note.

The Iseq rose 1 per cent to 6,708, bucking the trend in Europe. Kerry Group enjoyed its biggest one-day bounce of 2018, rising nearly 4 per cent €85.20. The jump appears to have coincided with the opening of US markets, but traders were unable to explain the move, putting it down to market dynamics.

In contrast, Permanent TSB had another bad day, trading down 3.5 per cent at €1.77 amid speculation about its future as a standalone bank. Smurfit Kappa was up 3 per cent at 35.56 following speculation that the box maker might be talking to a rival merger partner such as Mondi.

The blue-chip FTSE 100 index ended the session down 0.9 per cent at 7,198.20 points, with traders across Europe remaining cautious, fearing that the weekend’s missile strikes in Syria could increase tensions between the US and Russia. Relief over the lack of an immediate escalation pushed oil prices lower and UK energy stocks followed suit. BP was down 1.6 per cent and Royal Dutch Shell 0.7 per cent. Shares in WPP ended 6.5 per cent down as investors gauged how the world’s biggest advertising agency would do without its founder, gone after an allegation of personal misconduct.

Shares in Whitbread led the FTSE with a 7.2 per cent rise after activist hedge fund Elliott Management revealed that it had increased its stake in Britain’s biggest hotel and coffee-shop operator to more than 6 per cent.

The pan-regional Stoxx 600 index fell 0.4 per cent. while among other European benchmarks, the FTSE tumbled 0.9 per cent and Germany’s Dax was also down 0.4 per cent.

Shares in some Russia-exposed companies underperformed as investors awaited the new sanctions on Russia, which a US diplomat said would target companies dealing with equipment related to Assad and chemical weapons use. Precious metals miner Polymetal fell 9.4 per cent and miner Evraz fell 6.8 percent, while Austrian lender Raiffeisen Bank, which gets a substantial chunk of revenues from Russia, declined 3.7 per cent.

Swiss pumpmaker Sulzer, which was last week freed from US sanctions related to its Russian investor Viktor Vekselberg, slipped 1.5 per cent. Over the weekend Sulzer said its business was “fully back to normal” after it received a second licence fully unblocking its assets.

US stocks rose on Monday, boosted by healthcare stocks and on easing fears that the recent US-led missile attack on Syria would escalate into a broader conflict. Merck rose 2.5 per cent after the company presented positive data on its cancer drug Keytruda, driving a 0.7 per cent gain in the healthcare index. Attention turned to what is expected to be a robust first-quarter earnings season. Shares of JB Hunt Transport Services jumped 7 per cent after the trucking company’s profit topped estimates. But Bank of America edged lower despite reporting a better-than-expected increase in quarterly profit.

Shares of optical components makers Acacia Communications, Oclaro, Lumentum and Finisar took a beating after Reuters reported that the US government was banning American companies from selling components to Chinese telecom equipment maker ZTE Corp. Netflix fell more than 2 per cent. The company is expected to reports results after the closing bell on Monday. – Additional reporting by Reuters