Stocks linked to Russia hit by fears over US sanctions 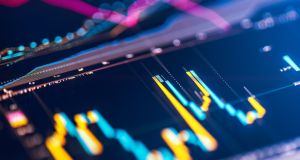 Further US sanctions on Russian interests hit Europe-listed stocks on Monday, denting a recovery as investors became more hopeful a trade war between the United States and China could be averted.

The Iseq remained virtually flat on thin trading volumes. The slide in Independent News & Media’s (INM) share price continued, following the drip feed into the market of further allegations of corporate governance breaches. INM finished the session down 6.7 per cent at 8.4 cent per share, which is down more than 40 per cent in the past year. The share dipped late in the afternoon on Monday after a seller entered the market just before close.

Irish companies linked to the oil and gas exploration industries rallied, in tandem with the price of oil. Providence Resources rose by more than 4 per cent to 12.5 cent. Falcon Oil & Gas finished up more than 3 per cent at 23 cent per share.

Permanent TSB (PTSB), which is majority State owned, finished the session up almost 3 per cent at €1.97, following news that is sharpening its competitive offering in the mortgage market.

London-listed Russian stocks slumped as companies suffered from delayed investor reaction to the launch of US sanctions against Moscow on Friday. The FTSE 100 ended the day up 0.15 per cent or 11.11 points at 7,194.75, but was dragged down by Russian mining company Evraz, which held the bottom spot on the blue chip index after falling 65.1p to 385.4p.

It follow’s Friday’s launch of US sanctions on a raft of high-profile Russian business people, their companies and senior officials over what the US Treasury called a “range of malign activity around the globe”, including continued occupation of Crimea and the supply of weaponry to the Assad regime in Syria. The US also cited “malicious cyber activities” and attempts to “subvert Western democracies”.

Across Europe, the French Cac 40 and German Dax rose 0.1 per cent and 0.17 per cent respectively.

The pan-European Stoxx 600 index ended the day up just 0.1 per cent as sanctions that included a blacklisting of aluminium giant Rusal sent mining stocks spiralling lower.

Stocks linked to allies of President Vladimir Putin suffered sharp declines. Shares in Swiss pump maker Sulzer and technology group Oerlikon were also sharply down, falling 8.5 per cent and 8.4 per cent respectively, after their majority holder Viktor Vekselberg appeared on the sanctions list.

Companies with significant operations in Russia were also punished. Precious metals miner Polymetal sank 18 per cent, the worst Stoxx faller, while Raiffeisen Bank tumbled 12 per cent. Shares in Carlsberg, which sells a lot of its beer in Russia, significantly lagged beverage sector peers, declining 1.1 per cent.

Financial stocks provided the most support to the market with Deutsche Bank up 1.2 per cent after it named a new chief executive who said tough decisions would have to be made and the structure of its investment bank reviewed.

Wall Street led global stocks higher on Monday as the beaten-down tech sector rallied, also lifting oil prices, while investors kept an eye on a US-China trade spat. Large-cap US tech companies rose 2.6 per cent but are still down more than 7 per cent from a record high hit four weeks ago.

The United States and China have threatened each other with tens of billions of dollars of tariffs. China stepped up its attacks on the Trump administration on Monday, saying Washington was to blame for the frictions and repeating it was impossible to negotiate under “current circumstances”.

The comments came after US president Donald Trump on Sunday predicted China would take down its trade barriers, and expressed optimism that both sides could resolve the issue through talks.

The next big focus will be a speech by Chinese president Xi Jinping on Tuesday.

1 Coronavirus: Property rental in the jaws of the epidemic
2 WhatsApp limits message forwarding to slow spread of misinformation
3 I want to change my will quickly in case I fall ill. Do I need a lawyer?
4 NTMA raises €6bn from bond auction to help State meet costs of Covid-19
5 Kerry fintech Taxamo agrees partnership with Deloitte
6 Cineworld closes all its cinemas due to coronavirus pandemic
7 Workers may face tax bill on emergency State wage subsidy
8 Aviation sector slumps as Penney’s become most valuable Irish brand
9 Wall Street jumps at the open as European and Asian shares rally
10 Staff in Dublin and Cork airports receive profit share and bonuses for last year
Real news has value SUBSCRIBE