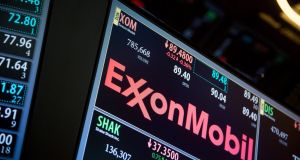 Exxon Mobil Corp. signage is displayed on a monitor on the floor of the New York Stock Exchange. The S&P 500 fell 0.2 per cent, after losing as much as 0.5 per cent. The Dow Jones Industrial Average declined 0.1 per cent, to 17,771.62. The Nasdaq Composite slipped 0.2 per cent. (

The Stoxx Europe 600 Index added less than 0.1 percent at the close of trading.

Independent News & Media fell 0.7 per cent to 15.3 cents after the group said its advertising revenue declined in the four months to the end of April as a result of an accelerated decline in print advertising.

Ryanair inched 0.5 per cent higher to €14.40 as the group’s passengers grew by 12 per cent year-on-year in May, outpacing its 9 per cent traffic growth forecast for its current financial year.

Irish Continental Group rose 2.9 per cent to €5.58 after the ferries operator said it had taken delivery of a high-speed craft, Westpac Express, for $13.3 million (€11.9 million).

Smurfit Kappa edged 0.4 per cent higher to €24.45 on confirmation after the markets closed on Wednesday that the cardboard box-maker’s shares will join the FTSE 250 later this month.

Tullow Oil was little changed as Standard & Poor’s removed the threat of an immediate downgrade to its B rating on the company but kept it on a negative outlook.

UK equities reversed earlier gains, ending the day little changed at their lowest levels since May 23.

Companies such as National Grid and Marks & Spencer fell after trading without the attraction of their latest dividend payouts.

Oil group Total fell 1.6 per cent after the Organization of Petroleum Exporting Countries stuck to its policy of unfettered oil production.

Carmakers advanced as the euro fell against the dollar, helping exporters. Meanwhile, the ECB kept its inflation forecasts for the next two years unchanged, while slightly increasing its prediction for 2016. President Draghi called on governments to play a bigger role in cementing the region’s pickup, and said the central bank will embark on corporate-bond purchases starting next week.

“We know it’s extremely difficult for OPEC to reach any kind of agreement because the countries don’t have the same agendas,” said Pierre Mouton, who helps manage about $9 billion at Notz Stucki and Cie in Geneva. “Maybe they would have done something if oil prices were at $40 or below. With oil near $50, there is less incentive. The ECB decision did not come as a surprise -- nothing was really expected as of today.”

Among stocks active on corporate news, Austrian steelmaker Voestalpine gained 4.3 per cent after announcing plans to invest in a stainless steel mill in its domesic market and forecasting annual earnings similar to the previous year. Moneysupermarket. com tumbled 6.4 per cent after analysts at Jefferies Group downgraded the price-comparison website operator to hold from buy, citing tough market conditions.

US stocks fluctuated in midafternoon trading on Wall Street as steady job gains supported the case for higher interest rates as early as this summer.

Apple slid on concern of slowing growth in the smartphone industry, while Oracle sank the most this year after allegations of improper accounting practices.

Health-care shares rallied for a seventh session, with Johnson and Johnson pacing gains after agreeing to buy closely held Vogue International for about $3.3 billion.

“I think investors are rightly fixated on [FRIDAY’S]release with labour figures,” said Eric Wiegand, senior portfolio manager at the Private Client Reserve of US Bank in New York. “Between the ECB, looking at initial jobless claims, and you add the ADP numbers and also OPEC, it really points to the limited expectations and none of the data points being outside the realm of what was anticipated.”