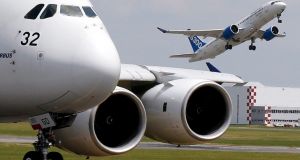 The pan-European FTSEurofirst 300 index closed flat but nevertheless rose around 8 per cent over the course of the month, for its best monthly performance since July 2009.

The euro zone’s Euro Stoxx 50 index rose 0.1 per cent, while Germany’s Dax gained 0.5 per cent. Some investors saw signs that the European Central Bank would undertake more measures to spur business and trade in Europe as a reason to keep buying European equities.

“There are a lot of bargains out there and I expect the market to stabilise and gradually improve as we approach the end of the year,” said Massimo Baggiani, head of international equities at asset manager Symphonia.

DUBLIN The Iseq index of shares closed up 0.4 per cent at 6,428 roughly tracking movements aboard. Swiss-Irish food group Aryzta closed down 0.75 per cent at €41.23 after announcing a major boardroom reshuffle.

The company’s shares have lost about 50 per cent of their value since January as a result of investor disquiet over its acquisition strategy and its underperforming US arm.

Among leading decliners, Royal Bank of Scotland shares slipped 1 percent after the bank posted a third-quarter loss and warned that future costs relating to litigation and past misconduct might be substantially higher than expected.

Oil companies fell after the price of oil slipped following disappointing US economic growth figures, with the UK Oil and Gas index dropping 1.1 per cent. Shares in airline IAG fell 2.5 per cent, to be the top decliner in the FTSE 100, after its profit guidance disappointed investors.

Cosmetics group L’Oreal fell 4.6 per cent after its third-quarter figures missed market forecasts, while Spanish bank BBVA declined 3.5 per cent after it reported a loss that was worse than feared. According to data from Thomson Reuters StarMine, 52 per cent of companies in the European Stoxx 600 index have beaten or met expectations with their results so far this quarter, although earnings have fallen from a year ago.

The Athens market also underperformed, with a 2 per cent drop.

Shares in major Greek banks slumped after banking sources told Reuters that a health check on them by the European Central Bank (ECB) would reveal a total capital shortfall of up to €14 billion.

NEW YORK US stock indexes edged lower early yesterday as investors sorted through mixed earnings reports, but were still poised to finish with their best monthly performances in four years.

The S&P 500 energy index was the best-performing sector, rising 1.5 per cent after better than expected results from Exxon and Chevron, each up nearly 2 per cent.

Shares of drug maker AbbVie jumped 12.1 per cent to $60.62, the biggest positive driver for the S&P 500 index, after posting better than expected quarterly profit and a strong long-term outlook. – Additional reporting by Reuters/PA