Shares surge across Europe as results season kicks in 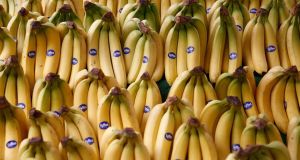 Fyffes, the banana distributor, slipped more than 1.5 per cent to close the day at €1.17 per share. Photograph: Simon Dawson/Bloomberg

The Dublin stock exchange reached its highest level since 2008, climbing 1.1 per cent.

Shares rose across most of Europe, building on their best start to the year since regional benchmarks began in late 1986, to close at seven-year highs supported by encouraging earnings reports.

The FTSEurofirst 300 index of top European shares closed up 0.4 per cent while the broader STOXX 600 was also up 0.4 per cent. DUBLIN Bank of Ireland jumped 7.6 per cent as Richie Boucher, its chief executive officer, said he’s focused on returning the lender to paying dividends after it swung into profit in 2014. The stock came close to a rise of 8.5 per cent in the early afternoon before slipping back.

Fyffes, the banana distributor controlled by the McCann family, slipped more than 1.5 per cent to close the day at €1.17 per share. It reported results that showed a sales increase of less than 1 per cent. The company told investors it will seek price rises in some of its markets to mitigate the strengthening of the dollar against the euro.

Kenmare Resources, which is locked in talks with its banks as it seeks additional financing, fell 5.65 per cent as it was hammered in the last hour of trading, paring back its significant gains from Thursday. The company has indicated this week that it is confident of its lenders’ support. LONDON IAG, the owner of British Airways, rose 3.7 per cent and briefly set a record high after increasing its 2015 profit forecast.

Standard Chartered also advanced for the second day in a row, rising 1.5 per cent, after Canaccord Genuity upgraded its rating to “hold” from “sell”.

Royal Bank of Scotland, which has announced further cutbacks in investment banking and a £3.5 billion loss, also dropped 5 per cent after Société Générale downgraded it to “sell” from “hold” and JP Morgan cut its price target.

RBS rival Lloyds – which along with RBS was bailed out during the financial crisis of 2007-2009 – rose 0.6 per cent after announcing its first dividend in more than six years. EUROPE Airbus advanced 7.2 per cent. The European aerospace company reported a 15 per cent gain in annual profit after increasing commercial plane deliveries. It also said it would boost monthly production of its A320 single-aisle aircraft to 50 a month by 2017.

Sika climbed 2.4 per cent. The Swiss adhesives maker resisting a takeover by Saint-Gobain reported full-year earnings that beat analyst estimates, helped by sales growth in all regions and demand for its mortar business.

Greece’s ASE Index slid 2.7 per cent, for the worst performance of 18 western-European markets. Banks led declines, with Piraeus Bank and Eurobank Ergasias falling more than 8 per cent. NEW YORK US stocks fluctuated, with benchmark indexes headed for the best month since 2011, while Treasuries strengthened as investors assessed economic data for clues on the timing of any interest-rate increase.

The Standard and Poor’s 500 Index slipped 0.1 per cent by early afternoon in New York. It has gained 5.7 per cent in February.

Gap, the clothing retailer, rose 3.8 per cent after fourth -quarter profit beat estimates. Apparel retailer Ross Stores gained 6.7 per cent after announcing a buyback and boosting its dividend.Monster Beverage jumped 13 per cent after expanding a distribution pact with Coca-Cola.

1 Revenue publishes list of companies tapping State for wage support
2 How long can Government afford to keep State pension age at 66?
3 Cosgrave Property Group secures exit from Nama
4 Developers may need to go back to the drawing board as one-beds fall from favour
5 Halfords sees 700% increase in sales of e-scooters
6 Covid-19 will have a significantly worse impact on UK public finances than on ours
7 Grocery shopping app Buymie delivering for Devan Hughes
8 NatWest CEO declines to give timeline for Ulster Bank decision
9 Irish homeowners must see rates relief if they make it through Covid turmoil
10 Bake-off soy sauce tweet backfires for UK trade ministry
Real news has value SUBSCRIBE