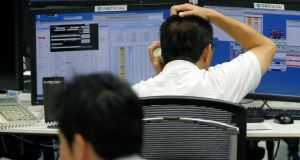 European shares fell on Friday, setting them on course for a weekly loss, as investors were unnerved by conflicting signals from Greece’s debt talks and data showing private loan growth in the euro zone stalled last month.

The FTSEurofirst was down 0.9 per cent for the week so far, which has been marked by uncertainty surrounding Greece’s negotiations with its international lenders ahead of a payment deadline for Athens looming next week. The index is still up around 1.7 per cent for the month.

Greece’s government intends to reach an agreement on a cash-for-reforms deal by Sunday, its spokesman said on Thursday, even as euro zone officials suggested a deal was far from imminent and the head of the International Monetary Fund was quoted as saying the country could leave the currency bloc.

The lack of clarity on the outcome meant some traders were reluctant to make strong bets on future market directions. “It’s just Greece, Greece and Greece,” David Madden, a market analyst at IG, said. “The lack of news in either direction tells you why traders are sitting on their hands.”

European indexes extended losses after data showed euro zone private sector loans stopped rising in April. Mergers & acquisition speculation boosted Swiss agrochemicals company Syngenta, which was building up defenses for a possible higher bid from US peer Monsanto, according to a Bloomberg report. Syngenta shares were up 2.3 per cent.

Swedish builder Skanska rose 2 per cent after it said its LaGuardia Gateway Partners consortium had been selected as preferred bidder in a $3.6 billion project to build a new terminal at New York’s LaGuardia Airport.