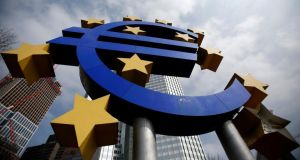 The front of the European Central Bank headquarters in Frankfurt, Germany: the ECB has kept its benchmark interest rate unchanged at a record low 0.25 per cent

DUBLIN
Irish Continental Group rose 1.61 per cent to €31.50. ICG said its revenue for the year to the end of December rose by 3.4 per cent to €264.7 million while operating profits for the year grew by over 13 per cent to €30 million. The company said it was encouraged to invest more in its fleet by Ireland’s improved economic outlook.

Origin Enterprises rose 2.54 per cent to €7.38. The company said six month revenue fell by 8.8 per cent to €517.6 million from €567.7 million due to lower prices for both feed and global fertiliser. Tom O’Mahony, Origin chief executive, said the company delivered a “solid operating and financial performance” during the seasonally quiet first half of the year.

Bank of Ireland rose by 1.22 per cent to 33 cent. The bank’s solid financial results have “added to demand” for the stock, a Dublin broker said. AIB was up 4.73 per cent to 16 cent, but a broker said this was “not overly significant.”

Aviva jumped to its highest price since September 2008 after posting a 6 per cent increase in 2013 operating profit. IMI declined to an eight-month low after forecasting a lower profit margin and modest revenue growth in the first half of the year. Aggreko rallied the most this year after saying it will return about £200 million to shareholders in addition to paying a dividend.

The FTSE 100 Index gained 13.07 points, or 0.2 per cent, to 6,788.49 at the close in London. The measure jumped the most in eight months on March 4th as Russian president Vladimir Putin eased investor concern about a standoff in Ukraine by saying he saw no immediate need to invade the country.

The Bank of England yesterday held its benchmark interest rate at 0.5 per cent, as predicted by economists.

Schroders climbed 5.3 per cent to 2,727 pence after raising its dividend by 40 per cent to 42 pence. The UK’s biggest publicly traded money manager also said 2013 pre-tax profit before one-time items jumped 41 per cent to £507.8 million.

EUROPE
Deutsche Telekom fell 3.6 per cent to €11.76. The sale of the T-Mobile US unit is less likely in the near term because of regulatory hurdles, chief executive Timotheus Hoettges told directors yesterday, according to two people with direct knowledge of the matter.

Germany’s largest phone company said free cash flow will increase “slightly” in 2015 after falling 8.7 per cent to €4.2 billion in 2014. Deutsche Telekom, which plans higher spending to boost its US business, earlier projected free cash flow of about €6 billion for next year.

Merck fell 4.4 per cent to €119.50. The maker of the Erbitux cancer drug said profit this year will be similar to last, when the company earned €3.25 billion. Merck reported a 0.7 per cent increase in fourth-quarter earnings before interest, taxes, depreciation and amortisation.

Bouygues jumped 6.6 per cent to €30.67. The construction and telecommunications group offered €10.5 billion in cash for SFR, a deal that would potentially create a phone carrier rivaling Orange. Altice, which put in a separate bid, values SFR at about $20 billion through a mixture of debt, cash and equity, people familiar with the matter said.

Orange rallied 11 per cent to €10.13. France’s largest phone company said a key measure of profit may not fall this year for the first time in at least five years. Restated earnings before interest, taxes, depreciation and amortisation will be between €12.1 billion and €12.6 billion.

NEW YORK
US stocks rose, sending the Standard & Poor’s 500 Index to an all-time high, as data showed jobless claims fell to the lowest level in three months and investors watched developments in Ukraine.

Biogen Idec rose 2.1 per cent to $346.07. BMO Capital Markets analyst Jim Birchenough raised the drugmaker’s rating to outperform, the equivalent of buy, from market perform, with a 12-month target price of $422.

Sangamo Biosciences jumped 22 per cent to $23.83 after the company said its experimental treatment lowered the amount of HIV in some AIDS patients.

Pluristem rose 5.9 per cent to $4.30. The Food and Drug Administration gave its approval for the company to manufacture placenta-based cell therapies at its new production unit.

Pixelworks soared 55 per cent to $7.42. The semiconductor company’s sales to Apple represented more than 10 per cent of its annual revenue, according to a March 5th regulatory filing. The previous year’s filing did not list the iPhone maker under customers that contribute at least 10 per cent to total sales.

Staples plunged 15 per cent to $11.33 for the biggest drop in the S&P 500. The largest office-supplies chain will close as many as 225 stores in North America and reduce costs by as much as $500 million by the end of 2015, as it forecast sales to drop for a fifth consecutive quarter. (Additional reporting Bloomberg)