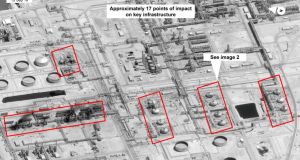 This image provided by the U.S. government and DigitalGlobe shows damage to the infrastructure at Saudi Aramco’s Abaqaiq oil processing facility in Buqyaq.

Oil prices rose as much as 20 per cent on Monday to above $71 (€64.50) a barrel – the most in nearly three decades – as markets reopened after an attack on Saudi Arabia’s oil infrastructure at the weekend cut more than half the country’s production.

The rally, which followed news that Saudi Arabia’s oil production is expected to be well below maximum capacity for weeks, set oil on course for one of its biggest one-day gains as traders worried over the extent of the outage. Brent crude oil, the international benchmark, gained almost $12 to trade as high as $71.95 a barrel, before easing back to $66.37 by late morning in Asia, still up by more than 10 per cent.

The US benchmark, West Texas Intermediate, was up by as much as 16 per cent to $63.64 a barrel before paring back these gains in the Asian morning to 9.2 per cent.The attack, which the US has said was orchestrated by Iran, has sharply raised geopolitical risks in global energy markets and may reverberate through the wider economy.

The short-term fear is about the lack of clarity from Saudi Arabia, the world’s largest oil exporter, over how long it will take to restore output towards the 9.8 million barrel a day level of before the attack.The loss of more than five million barrels per day is the single biggest outage from one incident, and is equal to more than 5 per cent of global supply. Brent’s spike on the open was the largest move in percentage terms since Saddam Hussein invaded Kuwait in 1990.

Jason Gammel at Jefferies said the attack had led to an “unprecedented threat to supply” and it would be the “overwhelming driver of price in the near term”.

In China, the world’s biggest oil importer, oil futures jumped as much as 8 per cent as the country’s statistics bureau reported domestic oil production of just 16.2 million metric tons in August. That took year-to-date output 1 per cent higher to 127.5 million metric tonnes, while oil imports during the same period were up 10 per cent from a year ago at 328 million tonnes, according to FT calculations.

“It’s definitely a sharp knee-jerk reaction,” Kerry Craig, markets strategist at JPMorgan Asset Management, said of the price movements. Asian oil-importing countries could come under pressure until key questions about oil producers’ ability to smooth out prices were answered: “Until you get that clarity the market’s going to remain nervous,” Mr Craig said.

Iran-backed Houthi militias in Yemen claimed responsibility for the attack on Saturday, saying they used drones to target Saudi Arabia’s oil infrastructure. However, Washington has indicated it suspects the attack may have originated in one of the kingdom’s other neighbours.

US president Donald Trump tweeted seconds before the market opened, in his first public comments on the attack, that he had authorised the release of emergency oil stocks “if needed” in a “to-be-determined amount” in a clear effort to calm the spike.

Shortly after prices spiked, the US president again took to Twitter, saying that “[We] are locked and loaded” and had suspicions who was behind the attack, suggesting a possible military response.“Saudi Arabia oil supply was attacked,” Mr Trump tweeted.

“There is reason to believe that we know the culprit, are locked and loaded depending on verification, but are waiting to hear from the Kingdom as to who they believe was the cause of this attack, and under what terms we would proceed!”

He then tweeted: “PLENTY OF OIL!”Oil prices edged slightly higher in the minutes after his second round of tweets, to trade up 13 per cent.

Saudi Arabia has been rushing to restore supplies, and has said it will be able to supply oil from storage as well as bring spare production capacity on stream. But sources briefed on the situation said a large percentage of the 5.7 million barrels per day of crude output that went offline on Saturday could be lost for some time.

The attack on Abqaiq, a crude processing centre southwest of Aramco’s headquarters in Dhahran that prepares almost 70 per cent of the kingdom’s crude for export, is of particular concern because the complex facility is vital to crude output. The Khurais oilfield was also targeted.

Traders and analysts warned that even if Saudi Arabia can restore output more quickly than currently expected, fears of further attacks – or retaliation by Riyadh or Washington against Iran – could further destabilise global energy markets.Eurasia Group, a consultancy, said the weekend’s events “will encourage markets to re-examine the need for considering an oil geopolitical risk premium” and said a prolonged outage could lead to a $10 a barrel increase in prices.

A sharp rise in oil prices also comes at a delicate time for the global economy. Fears of a slowdown are percolating and unlikely to be helped by higher energy costs. The International Energy Agency and the US department of energy said they have ample emergency reserves which they could turn to in the event of a prolonged disruption, but analysts said it may not be enough to stop prices spiking first.

Saudi Arabia’s press agency said late on Sunday that Crown Prince Mohammed bin Salman had received a telephone call from his counterpart in Abu Dhabi, who condemned the attack. The statement stressed that Saudi Arabia “has the ability to confront and deal with this terrorist aggression”.

The state news body also said Prince Abdulaziz bin Salman, the kingdom’s energy minister, had inspected the Saudi Aramco plants in Abqaiq this weekend and had held meetings with the chairman and chief executive of the state oil company. It made no comment on the likely length of the production outage.

“With the Saudis already being able to make up 40 per cent of the lost production and the potential for some strategic reserve releases, the attack should prove disruptive as opposed to catastrophic,” analysts at Citigroup wrote.

They estimated a $5 to $10 increase for crude prices and a climb in gasoline prices of $0.10 to $0.25 per gallon (about $0.02 to $0.05 per litre), “which becomes a costly nuisance, but not a disaster, unless other facilities are attacked or counterattacks occur on other countries”. – Copyright The Financial Times Limited 2019.