Intel down 8.8% on concerns over its slowing data centre revenue growth 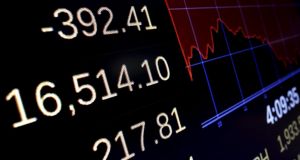 Wall Street sank on Friday morning, with the Nasdaq hitting its lowest since August 24th and the Dow plunging nearly 400 points, as oil prices dived below $30 per barrel.

The sell-off was broad, with all 10 major S&P sectors in the red and all 30 Dow components lower. The beaten-down energy sector’s 3.1 per cent slide led the declines.

Brent crude prices, which have fallen 20 per cent this year, were down nearly 5 per cent as the market braced for oil from Iran to flood an already oversupplied market.

World stocks were set for a third straight week of losses.

US stocks have been in a steep selloff since the start of the year amid concerns about a slowdown in China and global growth. But, a rebound in oil prices fueled a rally on Thursday.

Dow components Exxon and Chevron were down 3-4.5 per cent, while Caterpillar dropped nearly 4.5 per cent.

But the biggest drop was in Intel, tumbling 8.8 per cent to $29.87 as concerns about the chipmaker’s slowing data centre revenue growth overshadowed a quarterly profit beat.

Apple was down 3 per cent and was the biggest drag on the S&P and the Nasdaq, while Goldman Sachs’ 3 percent fall weighed the most on the Dow.

Investors are bracing for weak earnings reports with companies hit by plunging oil prices, concerns over China’s economy and a global economic slowdown.

Data on Friday showed an unexpected 0.1 per cent fall in US retail sales in December as unseasonably warm weather hurt sales of winter apparel.

US industrial output fell for the third straight month in December, underscoring a worsening outlook for fourth-quarter economic growth.

Fed policymakers have hinted at slowing the rate hike programme should the economy not show signs of stability.