Iseq index falls by 2.5 per cent but full effect of debt crisis likely to come later 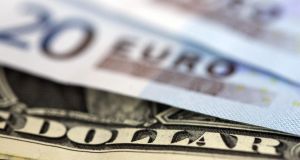 Treasuries advanced with the yen and gold as the market fell and investors sought haven assets. Photograph: Chris Ratcliffe/Bloomberg

Stock markets around the world wobbled yesterday on concerns that Greece would exit the euro. By 3pm in New York, US stocks had declined the most since April while European shares capped their worst day this year on concern about Greece’s default and the consequences it might have for the euro zone.

In Ireland, the Iseq Overall Index fell by 2.5 per cent to 6,209.14. Bank of Ireland and Permanent TSB, the two Irish stocks most likely to feel the effects of contagion from the crisis in Greece, fell by 5.5 per cent and 3 per cent respectively. Some 175 million shares in Bank of Ireland traded on the day.

The yield on Irish 10-year bonds went to 166 basis points, having been below 160 late last week.

Treasuries advanced with the yen and gold as investors sought haven assets. The Standard and Poor’s 500 Index slid 1.7 per cent at 3pm in New York, erasing its gain for the second quarter.

The Stoxx Europe 600 Index fell 2.7 per cent, the most since October 15th, as Germany’s Dax Index had its worst day since November 2011. Greece’s ASE Index was closed and will be shut for at least a week.

“This is going to get quite messy between now and the weekend,” Kevin Caron, a market strategist and portfolio manager who helps oversee $170 billion at Stifel Nicolaus and Co, in Florham Park, New Jersey, told Reuters. “There was an expectation that something would break positively at the last minute, but it appears it’s going to be a little messier than that.”

In Dublin, one senior market trader said there had been a “markdown” in Irish stocks “but no panic”. He suggested that the full effect of the Greek debt crisis on equities might not become evident until later in the week.

In a note to clients, Donal O’Mahony, a debt analyst with Irish stockbroker Davy, said markets had been “wrong-footed by [the] latest left-field twist, being generally complacent (sentiment and positioning) regarding the Greek negotiations’ end- game”.

The S and P 500’s decline yesterday left it flat for the past three months. – (Additional reporting by Reuters)