AIB, Bank of Ireland and Permanent TSB all down but C&C, Easyjet and Dalata rise 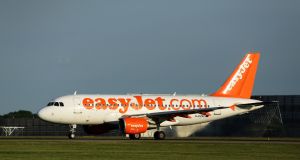 Markets rebounded yesterday after two weeks of losses, aided by gains in both Germany and Greece.

However, weaker than expected Chinese data hit miners and petroleum stocks, including Ireland’s Tullow Oil, while in Dublin the banks took the sheen off what was otherwise a good performance.

Cider-maker C&C, which is due to publish results this week, climbed 2.2 per cent to close at €4.055, although dealers noted that volumes were “not that great”. Fewer than 270,000 of its shares changed hands in the company in Dublin yesterday.

Airline Ryanair was up marginally, adding 0.63 per cent to close at €12.84, as rival Easyjet gained almost 4 per cent on the back of an outperform rating from analysts.

The Dalata Hotel Group gained 3.45 per cent to €4.50. The group announced the purchase of a hotel in Cork on Friday, but traders said the improvement was down more to improved sentiment towards the stock.

Insulation and building materials group Kingspan added 2.74 per cent to end the day on €23.28.

Betting giant Paddy Power Betfair rose 2.73 per cent. The stock took a hit last week following news that it lost €20 million at this year’s Cheltenham Festival. However, it has climbed back steadily from that.

The banks were the only black spot. AIB announced a cut in its standard variable mortgage rate and the new Government has signalled that it wants lenders to cut borrowing costs for home buyers.

The FTSE 100 index finished 0.2 per cent lower after falling 1.9 per cent last week, with the drop marking the third straight week of losses. The index is down around 2 per cent so far this year.

Irish-based DIY specialist and builders’ merchant Grafton, which is due to publish a statement ahead of today’s agm, rose 1.84 per cent to 690.50 pence sterling.

In contrast, shares in another Irish company, Tullow Oil, slid 5.38 per cent to 232 pence as commodity stocks tumbled on poor China trade data and a strong dollar. The overall UK mining index slumped 7.9 per cent. Shares in Anglo American, Glencore, Antofagasta, Rio Tinto and BHP Billiton fell between 5.6 per cent and 13.8 per cent.

The Dax received a boost from carmaker Volkswagen, whose shares rose after activist investor TCI demanded that VW overhaul its “excessive” executive pay scheme in order to boost profits at the company.